Veronica And Other Friends Two Stories For Children 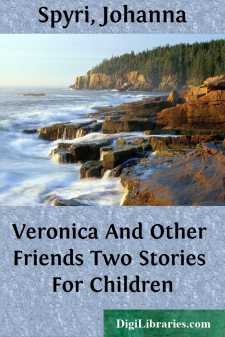 A VISIT TO THE DOCTOR.

It was early in the month of March. The dark blue vault of heaven lay over mountain and valley, swept free from clouds by the keen northern blast as it blew across the hills, swaying the big trees hither and thither as if they were bulrushes, and now and then tearing off huge branches which fell crashing to the ground. Other and sadder victims were sacrificed to this fierce north wind. Human beings as well as inanimate objects fell before him. He struck down with his mighty arm, not only the old and feeble, but the young and strong; just as he swept away the clouds, hurrying them across the skies, beyond the horizon line, away out of sight. Sometimes in one day, a cruel malady would seize one occupant out of each one of the three or four little villages clustered on the hillside. A sharp pain attacked the lungs, and after a brief illness the resistless disease bore away the sufferer to the silent grave.

At the very moment of which we write, a group of black-clad mourners were standing near one of the pleasantest houses in the isolated village of Tannenegg, waiting for the sound of the church bell, as the signal to lift the covered bier on which was stretched the body of a young woman, the last victim to the north wind's cruel stroke, and to bear her to her final resting place. In the quiet room within, two children were seated on a bench, which ran along the wall. They formed a striking contrast to each other. The girl, a little black-eyed frowning thing, dressed in some mourning stuff, followed with fierce looks the rapid movements of a woman who, standing before an open cup-board, was moving its contents over and about, as if in search of something that did not come to hand. The boy was also watching her, but his dancing blue eyes had in them a merry look of pleased expectation.

"I want to go out, Cousin Judith," said the girl, and her tones were half angry, half anxious, "Where can my mother be?"

"Be still, be still," said the woman, still tumbling the contents of the cup-board about nervously. "I shall find something pretty for you presently; then you must sit down quietly and play with it, and not go outside, not one step, do you hear? Pshaw! there is nothing but rubbish here!"

"Well, then give us the rose," said the little girl, still scowling.

The woman looked about the room.

"There are no roses here," she said. "How should there be, in March?" she added, half vexed at having looked for them. "There," said the child, pointing towards a book that the woman had but a moment before replaced in the cup-board.

"Ah! now I know what you mean. So your mother always kept the rose, the "Fortune rose?" I often envied her when she used to show it to us in her hymn-book;" and as she spoke, she turned the leaves of the old hymnal, until she found the rose and handed it to the child.

"Take it," she said, "be quiet, and do not get up from your seats till I come back;" and she hurried from the room.

The little girl took the prettily-painted rose, in her hand; it was an old acquaintance, her favorite Sunday plaything....