Vergilius A Tale of the Coming of Christ 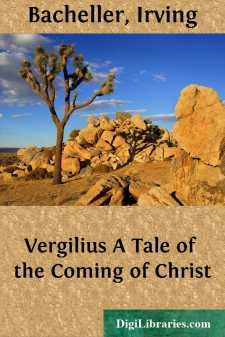 Rome had passed the summits and stood looking into the dark valley of fourteen hundred years. Behind her the graves of Caesar and Sallust and Cicero and Catullus and Vergil and Horace; before her centuries of madness and treading down; round about her a multitude sickening of luxury, their houses filled with spoil, their mouths with folly, their souls with discontent; above her only mystery and silence; in her train, philosophers questioning if it were not better for a man had he never been born—deeming life a misfortune and extinction the only happiness; poets singing no more of "pleasantries and trifles," but seeking favor with poor obscenities. Soon they were even to celebrate the virtue of harlots, the integrity of thieves, the tenderness of murderers, the justice of oppression. Leading the caravan were types abhorrent and self-opposed—effeminate men, masculine women, cheerful cynics, infidel priests, wealthy people with no credit, patricians, honoring and yet despising the gods, hating and yet living on the populace. Here was the spectacle of a republican empire, and an emperor gathering power while he affected to disdain it.

The splendor of the capital had attracted from all nations the idle rich, gamblers, speculators, voluptuaries, profligates, intriguers, criminals. To such an extreme had luxury been carried that nothing was too sacred, nothing too costly to be enjoyed. Digestion had become a science, courtship an art, sleep a nightmare, comfort an accomplishment, and the very act of living an industry. Almost one may say that the gods lived only in the imagination of the ignorant and the jests of the learned. In a growing patriciate home had become a weariness, marriage a form, children a trouble, and the decline of motherhood an alarming fact. Augustus tried the remedy of legislation. Henceforth marriage became a duty to the state. As between men and women, things were near a turning-point. Woman cannot long endure scorn nor the absence of veneration. A law older than the tablets of stone shall be her defence. Love is the price of motherhood. Soon or late, unless it be mingled in some degree with her passion, the wonderful gift is withdrawn and men cease to be born of her. Slowly, both the bitterness and the understanding of its loss turn the world to virtue. A new and lofty sentiment was appearing. Woman, weary of her part in the human comedy, had begun to inspire a love sublime as the miracle in which she is born to act.

Happily, there were good people in Rome, even noble families, with whom sacrifice had still a sacred power, and who practised the four virtues of honor, bravery, wisdom, and temperance. In rural Latium, rich and poor clung to the old faith, and everywhere a plebeian feared alike the assessor and the gods, and sacrificed to both.

It is no wonder the gods were falling when even Jupiter had been outdone by a modest man who dwelt on the Palatine. One might have seen him there any day—a rather delicate figure with shiny blue eyes and hair now turning gray....