Venus in Boston; A Romance of City Life 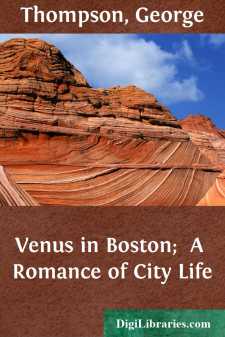 CHAPTER I The blind Basket-maker and his family.

It was a winter's day, and piercing cold; very few pedestrians were to be seen in Boston, and those few were carefully enveloped in warm cloak and great coats, for the weather was of that intense kind that chills the blood and penetrates to the very bone. Even Washington street—that great avenue of wealth and promenade of fashion, usually thronged with the pleasure-seeking denizens of the metropolis—was comparatively deserted, save by a few shivering mortals, who hurried on their way with rapid footsteps, anxious to escape from the relentless and iron grasp of hoary winter. And yet on that day, and in that street, there stood upon the pavement directly opposite the "Old South Church," a young girl of about the age of fourteen years, holding in her hand a small basket of fruit, which she offered to every passer-by. Now there was nothing very extraordinary in this, neither was there anything very unusual in the meek and pleading look of the little fruit girl, as she timidly raised her large blue eyes to the face of every one who passed her—for such humble callings, and such mute but eloquent appeals, are the common inheritance of many, very many of God's poor in large cities, and do not generally attract any great degree of notice from the careless (and too often unfeeling) children of prosperity;—but there was something in the appearance of the pale, sad girl, as, in her scant attire she shivered in the biting wind, not often met with in the humble disciples of poverty—a certain subdued, gentle air, partaking of much unconscious grace, that whispered of better days gone by.

At length the clock in the steeple of the "Old South" pronounced that the dinner hour had arrived—and despite the intense cold, the street soon became alive with people hurrying to and fro; for what weather can induce a hungry man to neglect that important era in the events of the day—his dinner? This perfumed exquisite hurried by to fulfil an appointment and dine at Parker's; the more sober and economical citizen hastened on his way to "feed" at some establishment of less pretensions and more moderate prices; while the mass of the diners-out repaired to appease their hunger at the numerous cheap refectories that abound in the neighborhood. But the poor, forlorn little fruit girl stood unnoticed by the passing throng, which like the curtain of a river hurried by, leaving her upon its margin, a neglected, drooping flower.

"Ah," she murmured—"why will they not buy my fruit? I have not taken a single penny to-day, and how can I return home to poor grandfather and my little brother, without food? Good people, could you but see them, your hearts would be softened—." And the tears rolled down her cheeks.

While thus soliloquizing, she had not noticed the approach of a little old man, in a faded, threadbare suit, and with a care-worn, wrinkled countenance. He stopped short when he saw that she was weeping, and in an abrupt, yet not unkind manner, inquired—

The girl looked up through her tears at the stranger, and in a few artless words related her simple story. She was an orphan, and with her little brother, lived with her grandfather. They were very poor, and were wholly dependent upon a small pittance which the grandfather (who was blind) daily earned by basket making, together with the very small profits which she realized by the sale of fruit in the streets. Her grandfather was very ill, and unable to work, and the poor family had not tasted food that day.

"Poor thing!" exclaimed the little old man when she had concluded her affecting narrative....