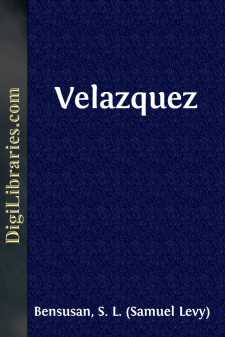 It is a curious truth that Spain in these days of her decline exercises almost as much control over the mind of the world as she exercised over its territories in the days of her great empire. Cervantes in literature and Velazquez in art seem destined to secure for their country a measure of immortality that throws into the background the memory of such people as Carlos Quinto, Philip II., and those other lesser lights who made the name of Spain respected or detested throughout Europe and South America. If science and art are destined, as some altruists hope, to unite the world in a bond that defies the arbitrary boundaries made by rulers, then the name of Diego de Silva Velazquez will stand high in the list of those whom the world delights to honour, for people who are opposed diametrically on all questions of politics and faith find ground upon which they may meet in security and amity when they stand before the pictures of the great Spanish master. And Cervantes, who used words instead of colours to express the life he saw around him, would redeem Spain from insignificance if she had never owned a colony, and had never sought to step beyond her own borders to develop the arts of peace or follow the paths of war.

Perhaps it would be hard to find more diverse opinions than those that are heard in the studio. Artists see life through the medium of many temperaments, they are notoriously intemperate in their enthusiasms. There are schools of painting to suit every conviction, and the work that one man would give his all to possess would not find hanging space upon the wall controlled by another. But before Velazquez even artists forget their controversies; he stands, like Bach and Beethoven in the world of music, respected even by those who do not understand. No controversy rages round him; he has marched unchallenged to the highest place in men's regard.

This picture was painted about the year 1656, and, now in the Prado, is considered one of the greatest works of the master. It presents the Infanta Margarita attended by her maids of honour, while Velazquez himself is shown painting the portraits of Philip IV. and his second wife Mariana of Austria, who are seen reflected in the mirror.

It is interesting to note that a reputation unrivalled in the world of pictures is founded upon a comparatively small number of works. One of his latest critics reduces the pictures of Velazquez now in existence to eighty-nine, while acknowledging that some have disappeared from the royal palaces of Spain and cannot be traced. This critic, Señor Don Aureliano de Beruete—a connoisseur, a collector, and a worker in the best interests of art—is perhaps a little too severe. He will not admit to his catalogue a portrait like that of Admiral Adriano Pulido Pareja, which, despite some inferior workmanship, can show considerable claims to be regarded as genuine; but even if all the disputed ones were admitted, and such a list as the late R. A. M. Stevenson published were accepted without that far-seeing critic's own reserve, we should not have as many pictures to represent the forty years of the artist's life as Sir Joshua Reynolds was known to paint in a single year. Velazquez has left very few drawings, and these are of small importance; there are but two acknowledged engravings; and to limit still further our sources of knowledge, the artist's correspondence seems to have been lost; while the Memoirs which Velazquez was said to have drawn up when Philip IV. sent the pictures to the Escorial are now admitted by the best authorities to be the work of another man.

I THE METHOD AND INFLUENCE OF VELAZQUEZ

In dealing with the life and work of the Spanish master, even in the modest fashion of this little monograph, one must bear in mind the fact that Velazquez, in the eyes of his contemporaries, was not only an artist—he was a court painter; and pictures other than portraits were of comparatively little importance to Philip IV. and his circle. Art borrowed most of her importance in sixteenth and seventeenth century Spain from the fact that she was the handmaid of Holy Mother Church. Velazquez was a court official who chanced to be a clever portrait-painter, and his promotion tended ever to take him further away from his art....