Varieties of Religious Experience, a Study in Human Nature 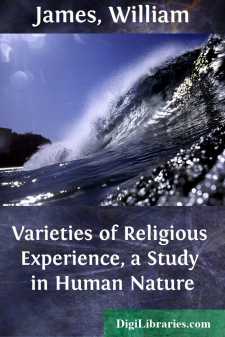 It is with no small amount of trepidation that I take my place behind this desk, and face this learned audience. To us Americans, the experience of receiving instruction from the living voice, as well as from the books, of European scholars, is very familiar. At my own University of Harvard, not a winter passes without its harvest, large or small, of lectures from Scottish, English, French, or German representatives of the science or literature of their respective countries whom we have either induced to cross the ocean to address us, or captured on the wing as they were visiting our land. It seems the natural thing for us to listen whilst the Europeans talk. The contrary habit, of talking whilst the Europeans listen, we have not yet acquired; and in him who first makes the adventure it begets a certain sense of apology being due for so presumptuous an act. Particularly must this be the case on a soil as sacred to the American imagination as that of Edinburgh. The glories of the philosophic chair of this university were deeply impressed on my imagination in boyhood. Professor Fraser's Essays in Philosophy, then just published, was the first philosophic book I ever looked into, and I well remember the awestruck feeling I received from the account of Sir William Hamilton's classroom therein contained. Hamilton's own lectures were the first philosophic writings I ever forced myself to study, and after that I was immersed in Dugald Stewart and Thomas Brown. Such juvenile emotions of reverence never get outgrown; and I confess that to find my humble self promoted from my native wilderness to be actually for the time an official here, and transmuted into a colleague of these illustrious names, carries with it a sense of dreamland quite as much as of reality.

But since I have received the honor of this appointment I have felt that it would never do to decline. The academic career also has its heroic obligations, so I stand here without further deprecatory words. Let me say only this, that now that the current, here and at Aberdeen, has begun to run from west to east, I hope it may continue to do so. As the years go by, I hope that many of my countrymen may be asked to lecture in the Scottish universities, changing places with Scotsmen lecturing in the United States; I hope that our people may become in all these higher matters even as one people; and that the peculiar philosophic temperament, as well as the peculiar political temperament, that goes with our English speech may more and more pervade and influence the world.

As regards the manner in which I shall have to administer this lectureship, I am neither a theologian, nor a scholar learned in the history of religions, nor an anthropologist. Psychology is the only branch of learning in which I am particularly versed. To the psychologist the religious propensities of man must be at least as interesting as any other of the facts pertaining to his mental constitution. It would seem, therefore, that, as a psychologist, the natural thing for me would be to invite you to a descriptive survey of those religious propensities....