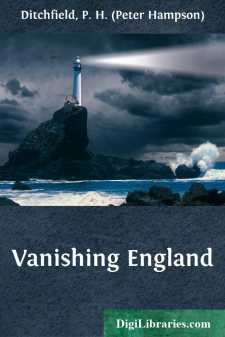 This book is intended not to raise fears but to record facts. We wish to describe with pen and pencil those features of England which are gradually disappearing, and to preserve the memory of them. It may be said that we have begun our quest too late; that so much has already vanished that it is hardly worth while to record what is left. Although much has gone, there is still, however, much remaining that is good, that reveals the artistic skill and taste of our forefathers, and recalls the wonders of old-time. It will be our endeavour to tell of the old country houses that Time has spared, the cottages that grace the village green, the stern grey walls that still guard some few of our towns, the old moot halls and public buildings. We shall see the old-time farmers and rustics gathering together at fair and market, their games and sports and merry-makings, and whatever relics of old English life have been left for an artist and scribe of the twentieth century to record.

Our age is an age of progress. Altiora peto is its motto. The spirit of progress is in the air, and lures its votaries on to higher flights. Sometimes they discover that they have been following a mere will-o'-the-wisp, that leads them into bog and quagmire whence no escape is possible. The England of a century, or even of half a century ago, has vanished, and we find ourselves in the midst of a busy, bustling world that knows no rest or peace. Inventions tread upon each other's heels in one long vast bewildering procession. We look back at the peaceful reign of the pack-horse, the rumbling wagon, the advent of the merry coaching days, the "Lightning" and the "Quicksilver," the chaining of the rivers with locks and bars, the network of canals that spread over the whole country; and then the first shriek of the railway engine startled the echoes of the countryside, a poor powerless thing that had to be pulled up the steep gradients by a chain attached to a big stationary engine at the summit. But it was the herald of the doom of the old-world England. Highways and coaching roads, canals and rivers, were abandoned and deserted. The old coachmen, once lords of the road, ended their days in the poorhouse, and steam, almighty steam, ruled everywhere.

Now the wayside inns wake up again with the bellow of the motor-car, which like a hideous monster rushes through the old-world villages, startling and killing old slow-footed rustics and scampering children, dogs and hens, and clouds of dust strive in very mercy to hide the view of the terrible rushing demon. In a few years' time the air will be conquered, and aeroplanes, balloons, flying-machines and air-ships, will drop down upon us from the skies and add a new terror to life.

Not in vain the distance beacons. Forward, forward let us range,Let the great world spin for ever down the ringing grooves of change.

Life is for ever changing, and doubtless everything is for the best in this best of possible worlds; but the antiquary may be forgiven for mourning over the destruction of many of the picturesque features of bygone times and revelling in the recollections of the past. The half-educated and the progressive—I attach no political meaning to the term—delight in their present environment, and care not to inquire too deeply into the origin of things; the study of evolution and development is outside their sphere; but yet, as Dean Church once wisely said, "In our eagerness for improvement it concerns us to be on our guard against the temptation of thinking that we can have the fruit or the flower, and yet destroy the root.... It concerns us that we do not despise our birthright and cast away our heritage of gifts and of powers, which we may lose, but not recover."

Every day witnesses the destruction of some old link with the past life of the people of England. A stone here, a buttress there—it matters not; these are of no consequence to the innovator or the iconoclast. If it may be our privilege to prevent any further spoliation of the heritage of Englishmen, if we can awaken any respect or reverence for the work of our forefathers, the labours of both artist and author will not have been in vain. Our heritage has been sadly diminished, but it has not yet altogether disappeared, and it is our object to try to record some of those objects of interest which are so fast perishing and vanishing from our view, in order that the remembrance of all the treasures that our country possesses may not disappear with them....