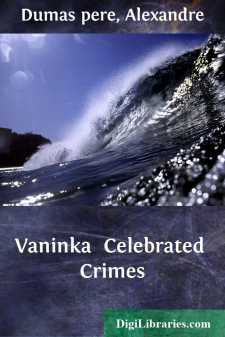 About the end of the reign of the Emperor Paul I—that is to say, towards the middle of the first year of the nineteenth century—just as four o'clock in the afternoon was sounding from the church of St. Peter and St. Paul, whose gilded vane overlooks the ramparts of the fortress, a crowd, composed of all sorts and conditions of people, began to gather in front of a house which belonged to General Count Tchermayloff, formerly military governor of a fair-sized town in the government of Pultava. The first spectators had been attracted by the preparations which they saw had been made in the middle of the courtyard for administering torture with the knout. One of the general's serfs, he who acted as barber, was to be the victim.

Although this kind of punishment was a common enough sight in St. Petersburg, it nevertheless attracted all passers-by when it was publicly administered. This was the occurrence which had caused a crowd, as just mentioned, before General Tchermayloff's house.

The spectators, even had they been in a hurry, would have had no cause to complain of being kept waiting, for at half-past four a young man of about five-and-twenty, in the handsome uniform of an aide-de-camp, his breast covered with decorations, appeared on the steps at the farther end of the court-yard in front of the house. These steps faced the large gateway, and led to the general's apartments.

Arrived on the steps, the young aide-de-camp stopped a moment and fixed his eyes on a window, the closely drawn curtains of which did not allow him the least chance of satisfying his curiosity, whatever may have been its cause. Seeing that it was useless and that he was only wasting time in gazing in that direction, he made a sign to a bearded man who was standing near a door which led to the servants' quarters. The door was immediately opened, and the culprit was seen advancing in the middle of a body of serfs and followed by the executioner. The serfs were forced to attend the spectacle, that it might serve as an example to them. The culprit was the general's barber, as we have said, and the executioner was merely the coachman, who, being used to the handling of a whip, was raised or degraded, which you will, to the office of executioner every time punishment with the knout was ordered. This duty did not deprive him of either the esteem or even the friendship of his comrades, for they well knew that it was his arm alone that punished them and that his heart was not in his work. As Ivan's arm as well as the rest of his body was the property of the general, and the latter could do as he pleased with it, no one was astonished that it should be used for this purpose. More than that, correction administered by Ivan was nearly always gentler than that meted out by another; for it often happened that Ivan, who was a good-natured fellow, juggled away one or two strokes of the knout in a dozen, or if he were forced by those assisting at the punishment to keep a strict calculation, he manoeuvred so that the tip of the lash struck the deal plank on which the culprit was lying, thus taking much of the sting out of the stroke. Accordingly, when it was Ivan's turn to be stretched upon the fatal plank and to receive the correction he was in the habit of administering, on his own account, those who momentarily played his part as executioner adopted the same expedients, remembering only the strokes spared and not the strokes received. This exchange of mutual benefits, therefore, was productive of an excellent understanding between Ivan and his comrades, which was never so firmly knit as at the moment when a fresh execution was about to take place. It is true that the first hour after the punishment was generally so full of suffering that the knouted was sometimes unjust to the knouter, but this feeling seldom out-lasted the evening, and it was rare when it held out after the first glass of spirits that the operator drank to the health of his patient....