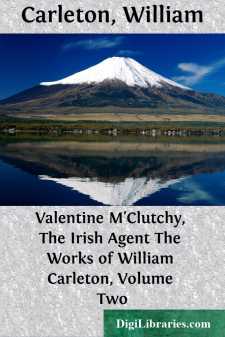 The town of Castle Cumber it is not our intention to describe at more length than simply to say, that it consists of two long streets, intersecting each other, and two or three lanes of cabins—many of them mud ones—that stretch out of it on each side at right angles. This street, and these straggling appendages, together with a Church, a Prison, a Court-house, a Catholic chapel, a few shops, and half a dozen public houses, present to the spectator all the features that are generally necessary for the description of that class of remote country towns of which we write. Indeed, with the exception of an ancient Stone Cross, that stands in the middle of the street, and a Fair green, as it is termed, or common, where its two half-yearly fairs are held, and which lies at the west end of it, there is little or nothing else to be added. The fair I particularly mention, because on the day on which the circumstances I am about to describe occurred, a fair was held in the town, and upon the green in question. The month was December—the day stormy and unpropitious. There had been a deep snow and hard frost for nearly three weeks before; but now the aspect of the white earth contrasted wildly with the large masses of black clouds which hung motionless in the air, and cast a dark and gloomy spirit not only over the appearance of inanimate nature, but into the heart of man himself.

About noon, just when the whole fair had been assembled, the storm commenced with wind, sleet, and rain. Never was a more striking or unexpected change produced. Women tucked up, nearly to the knees, their garments, soaked with wet, clinging to their bodies and limbs, as if a part of themselves—men drenched and buttoned up to the chin—all splashing through the slippery streets, their shoes spouting with snow-broth—the falling of tents—the shouting against the loudness of the storm, in order to be heard—the bleating of sheep, lowing of cattle, the deafening and wild hum of confused noises—all, when added to the roaring of the sweeping blast, the merciless pelting of the rain, and the inclement character of the whole day, presented a scene that was tempestuous and desolate beyond belief. Age, decrepid and shivering—youth, benumbed and stiffened with cold—rich and poor, man and woman, all had evidently but one object in view, and that was shelter.

Love, charity, amusement, business, were all either disappointed or forced to suspend their operations, at least for the present. Every one ran or walked as quickly as possible, with the exception of some forenoon drunkard, who staggered along at his ease, with an eye half indolent and half stupid, careless, if not unconscious of the wild uproar, both elemental and otherwise, by which he was surrounded.

Nay, the very beggars and impostors—to whom, in general, severe weather on such occasions is a godsend, as it presents them to their fellow-creatures in a more pitiable aspect—were glad to disperse....