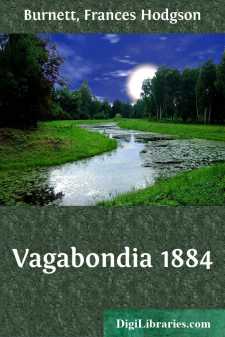 CHAPTER I. ~ IN WHICH WE HOLD COUNSEL.

It was a nondescript sort of a room, taking it altogether. A big, sunny room, whose once handsome papering and corniceing had grown dingy, and whose rich carpeting had lost its color and pile in places, and yet asserted its superiority to its surroundings with an air of lost grandeur in every shabby medallion. There were pictures in abundance on the walls, and more than one of them were gems in their way, despite the evidence all bore to being the work of amateurs. The tables were carved elaborately, and the faded, brocaded chairs were of the order pouf, and as inviting as they were disreputable in appearance; there was manuscript music among the general litter, a guitar hung from the wall by a tarnished blue and silver ribbon, and a violin lay on the piano; and yet, notwithstanding the air of free-and-easy disorder, one could hardly help recognizing a sort of vagabond comfort and luxury in the Bohemian surroundings. It was so very evident that the owners must enjoy life in an easy, light-hearted, though perhaps light-headed fashion; and it was also so very evident that their light hearts and light heads rose above their knowledge of their light purses.

They were congregated together now, holding a grand family council around the centre-table, and Dolly was the principal feature, as usual; and, embarrassing as the subject of said council was, not one of them looked as if it was other than a most excellent joke that Dolly, having been invited into the camps of the Philistines, should find she had nothing to put on to grace the occasion. And as to Dolly,—well, that young person stood in the midst of them in her shabby, Frenchy little hat, slapping one pink palm with a shabby, shapely kid glove, her eyes alight, her comical dismay and amusement displaying itself even in the arch of her brows.

"And so the Philistine leader pounced upon me herself," she was saying. "You know the 'Ark,' Phil? Well, they were all in the Ark,—the Rev. Bilberry in front, and the boys and girls filling up the corners; so you may imagine the effect produced when they stopped, and Lady Augusta bent over the side to solemnly proclaim her intention of inviting me to partake of coffee and conversation on Friday night, with an air of severely wondering whether I would dare to say 'No!'"

"Why did n't you say it?" said Aimée. "You know it will be an awful bore, Dolly. Those Bilberry clan gatherings always are. You have said so yourself often enough."

"Of course I have," returned Dolly. "And of course it will be, but it would be dreadfully indiscreet to let the Bilberry element know I thought so. The Bilberry doors once closed against us, where is our respectability, and Phil's chance of success among the Philistines? It is bad enough, of course, but there is reason to be thankful that I am the only victim. The rest of you would be sure to blunder into the B. B. B.'s [meaning the Bilberry black books], and that would be an agreeable state of affairs. 'Toinette, look at Tod, he is sitting in the coal-box eating Phil's fusees."