Us An Old Fashioned Story 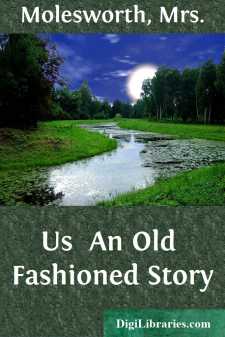 CHAPTER I. HOW THEY CAME TO BE "US." "Blue were their eyes as the fairy-flax,Their cheeks like the dawn of day." Longfellow.

A soft rather shaky sort of tap at the door. It does not all at once reach the rather deaf ears of the little old lady and tall, still older gentleman who are seated in their usual arm-chairs, one with his newspaper by the window, the other with her netting by the fire, in the exceedingly neat—neat, indeed, is no word for it—"parlour" of Arbitt Lodge. In what part of the country this queerly-named house was—is still, perhaps—to be found there is no particular reason for telling; whence came this same queer name will be told in good time. The parlour suited its name anyway better far than it would that of "drawing-room," which would be given it nowadays. There was a round table in the middle; there were high-backed mahogany chairs against the wall, polished by age and careful rubbing to that stage of dark shininess which makes even mahogany pleasant to the eye, and with seats of flowering silk damask whose texture must have been very good to be so faded without being worn; there were spindle-legged side-tables holding inlaid "papier-maché" desks and rose-wood work-boxes, and two or three carved cedar or sandal-wood cases of various shapes. And, most tempting of all to my mind, there were glass-doored cupboards in the wall, with great treasures of handleless teacups and very fat teapots, not to speak of bowls and jugs of every form and size; and everything, from the Indian box with the ivory chessmen to the china Turk with his long pipe of green spun-glass, sitting cross-legged on the high mantelpiece between a very sentimental lady and gentleman, also of china, who occupied its two ends,—everything was exactly and precisely in its own place, in what had been its own place ever since the day, now more than thirty years ago, when Grandpapa, the tall old gentleman, had retired from the army on half-pay and come to settle down at Arbitt Lodge for the rest of his life with Grandmamma and their son Marmaduke. A very small Marmaduke, for he was the only one left of a pretty flock who, one after the other, had but hovered down into the world for a year or two to spread their tiny wings and take flight again, leaving two desolate hearts behind them. And in this same parlour at Arbitt Lodge had that little Marmaduke learned to walk, and then to run, to gaze with admiring eyes on the treasures in the glass cupboards, to play bo-peep behind the thick silken curtains, even in his time faded to a withered-leaf green, to poke his tiny nose into the bowl of pot-pourri on the centre table, which made him sneeze just exactly as—ah! but I am forgetting—never mind, I may as well finish the sentence—just exactly as it made "us" sneeze now!

After the tap came a kind of little pattering and scratching, like baby taps, not quite sure of their own existence; then, had Grandpapa's and Grandmamma's ears been a very little sharper, they could not but have heard a small duel in words....