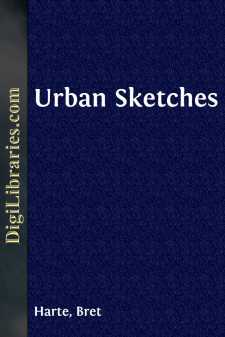 As I glance across my table, I am somewhat distracted by the spectacle of a venerable head whose crown occasionally appears beyond, at about its level. The apparition of a very small hand—whose fingers are bunchy and have the appearance of being slightly webbed—which is frequently lifted above the table in a vain and impotent attempt to reach the inkstand, always affects me as a novelty at each recurrence of the phenomenon. Yet both the venerable head and bunchy fingers belong to an individual with whom I am familiar, and to whom, for certain reasons hereafter described, I choose to apply the epithet written above this article.

His advent in the family was attended with peculiar circumstances. He was received with some concern—the number of retainers having been increased by one in honor of his arrival. He appeared to be weary,—his pretence was that he had come from a long journey,—so that for days, weeks, and even months, he did not leave his bed except when he was carried. But it was remarkable that his appetite was invariably regular and healthy, and that his meals, which he required should be brought to him, were seldom rejected. During this time he had little conversation with the family, his knowledge of our vernacular being limited, but occasionally spoke to himself in his own language,—a foreign tongue. The difficulties attending this eccentricity were obviated by the young woman who had from the first taken him under her protection,—being, like the rest of her sex, peculiarly open to impositions,—and who at once disorganized her own tongue to suit his. This was affected by the contraction of the syllables of some words, the addition of syllables to others, and an ingenious disregard for tenses and the governing powers of the verb. The same singular law which impels people in conversation with foreigners to imitate their broken English governed the family in their communications with him. He received these evidences of his power with an indifference not wholly free from scorn. The expression of his eye would occasionally denote that his higher nature revolted from them. I have no doubt myself that his wants were frequently misinterpreted; that the stretching forth of his hands toward the moon and stars might have been the performance of some religious rite peculiar to his own country, which was in ours misconstrued into a desire for physical nourishment. His repetition of the word "goo-goo,"—which was subject to a variety of opposite interpretations,—when taken in conjunction with his size, in my mind seemed to indicate his aboriginal or Aztec origin.

I incline to this belief, as it sustains the impression I have already hinted at, that his extreme youth is a simulation and deceit; that he is really older and has lived before at some remote period, and that his conduct fully justifies his title as A Venerable Impostor. A variety of circumstances corroborate this impression: His tottering walk, which is a senile as well as a juvenile condition; his venerable head, thatched with such imperceptible hair that, at a distance, it looks like a mild aureola, and his imperfect dental exhibition....