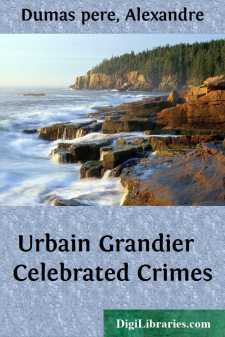 On Sunday, the 26th of November, 1631, there was great excitement in the little town of Loudun, especially in the narrow streets which led to the church of Saint-Pierre in the marketplace, from the gate of which the town was entered by anyone coming from the direction of the abbey of Saint-Jouin-les-Marmes. This excitement was caused by the expected arrival of a personage who had been much in people's mouths latterly in Loudun, and about whom there was such difference of opinion that discussion on the subject between those who were on his side and those who were against him was carried on with true provincial acrimony. It was easy to see, by the varied expressions on the faces of those who turned the doorsteps into improvised debating clubs, how varied were the feelings with which the man would be welcomed who had himself formally announced to friends and enemies alike the exact date of his return.

About nine o'clock a kind of sympathetic vibration ran through the crowd, and with the rapidity of a flash of lightning the words, "There he is! there he is!" passed from group to group. At this cry some withdrew into their houses and shut their doors and darkened their windows, as if it were a day of public mourning, while others opened them wide, as if to let joy enter. In a few moments the uproar and confusion evoked by the news was succeeded by the deep silence of breathless curiosity.

Then, through the silence, a figure advanced, carrying a branch of laurel in one hand as a token of triumph. It was that of a young man of from thirty-two to thirty-four years of age, with a graceful and well-knit frame, an aristocratic air and faultlessly beautiful features of a somewhat haughty expression. Although he had walked three leagues to reach the town, the ecclesiastical garb which he wore was not only elegant but of dainty freshness. His eyes turned to heaven, and singing in a sweet voice praise to the Lord, he passed through the streets leading to the church in the market-place with a slow and solemn gait, without vouchsafing a look, a word, or a gesture to anyone. The entire crowd, falling into step, marched behind him as he advanced, singing like him, the singers being the prettiest girls in Loudun, for we have forgotten to say that the crowd consisted almost entirely of women.

Meanwhile the object of all this commotion arrived at length at the porch of the church of Saint-Pierre. Ascending the steps, he knelt at the top and prayed in a low voice, then rising he touched the church doors with his laurel branch, and they opened wide as if by magic, revealing the choir decorated and illuminated as if for one of the four great feasts of the year, and with all its scholars, choir boys, singers, beadles, and vergers in their places. Glancing around, he for whom they were waiting came up the nave, passed through the choir, knelt for a second time at the foot of the altar, upon which he laid the branch of laurel, then putting on a robe as white as snow and passing the stole around his neck, he began the celebration of the mass before a congregation composed of all those who had followed him....