Up the River or, Yachting on the Mississippi 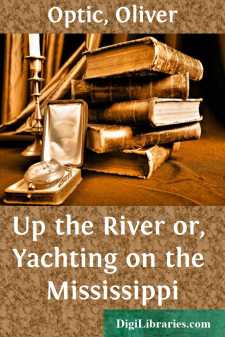 "I don't think it's quite the thing, Alick," said my cousin, Owen Garningham, as we were walking through Bay Street after our return to Jacksonville from the interior of Florida.

"What is not quite the thing, Owen?" I inquired, for he had given me no clue to what he was thinking about.

"After I chartered your steamer for a year to come here, and go up the Mississippi River—by the way, this river is called 'The Father of Waters,' isn't it?" asked Owen, flying off from the subject in his mind, as he was in the habit of doing.

"Every schoolboy in this country learns that from his geography," I replied.

"Happily, I was never a schoolboy in this country, and I didn't find it out from the geography. If the Mississippi is the Father of Waters, can you tell me who is the mother of them?"

"O, ah! Don't you feel faint, Captain Alick?" added Owen, stopping short on the sidewalk, and gazing into my face with a look of mock anxiety.

"Not at all; I think I could swallow a burly Briton or two, if the occasion required."

"Don't do it! It would ruin your digestion. But it strikes me those two rivers are but one."

"When I chartered the Sylvania to come down here, and then go up the 'Father of Waters,' it isn't quite the thing for your father to declare the whole thing off at this point of the cruise," replied Owen. "I was going to have a jolly good time going up the river."

"You may have it yet, for I have given you a cordial invitation to go 'up the river' with me; and I mean every word I said about the matter," I added, in soothing tones.

"But your father says the charter arrangement is ended, and you may go where you like in your steamer."

"And I concluded at once to carry out all the arrangements for this trip, just as we made them at Detroit," I replied. "I have invited the Shepards and the Tiffanys to join us, and everything will go on just as it did before, except that you will not pay the bills."

"Which means that, if I join you at all, I shall not be myself," returned Owen, with a look of disgust. "In other words, I shall not be my own master, and I must go where my uncle and you may choose to take me."

"Not at all; we are going up the Mississippi simply because that is the route you selected, and because I desire to carry out your plan of travel to the letter," I replied, rather warmly. "I don't think I could do anything more to meet your views than I have done."

"You are as noble, grand, magnanimous, as it is possible for any fellow to be, Alick; but that don't make me any more willing to be under obligations to you every day of my life."

"You need feel under no obligations to me."

"Ah, but I do, you see; and I still think it was not just the thing to break away from the written agreement we made," continued Owen, unable to conceal his vexation....