Up the Forked River Or, Adventures in South America 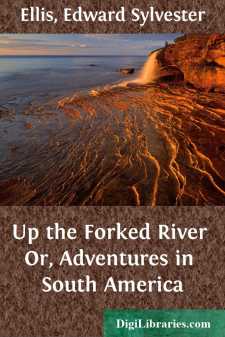 Two friends were seated in the private office of Rowland & Starland, Montgomery Street, San Francisco, not long ago, discussing a subject in which both were much interested.

Each gentleman was past three-score, but they were well preserved, of rugged health, well to do and prosperous. They had got on for many years without so much as a shadow of difference between them. They had made the tour of Europe together, had engaged in many an outing and now as the evening of life was drawing on, they took matters with that complacency and comfort which was creditable to their good sense and which was warranted by their circumstances.

Mr. Thomas Starland, the junior partner, removed his cigar, leaned back in his chair, and, looking kindly into the face of his friend, said:

“Teddy, you came to California a number of years before I did.”

The other, who was in a reminiscent mood, smoked in silence for a minute or so, looking up to the ceiling, and, when he replied, it was as if communing with himself:

“Yes; it is close upon half a century. How times flies! I was a small boy, and I often wonder how it was Providence took such good care of me.”

“True, you were a young lad, but you had the best of companions.”

“That is hardly correct, so far at least as one was concerned. When I left home in the East to join my father, who had come to California ahead of me, my companion was an Irishman named Micky McGuigan, who was as green as I.”

“I have heard you speak of another comrade—a four-footed one.”

“Ah, yes, our dog Towser, one of the most faithful and intelligent brutes that ever lived. He died long ago of old age and I have showed my gratitude and love for his memory by placing a monument over his remains. Micky—peace to the memory of the good fellow—has also rested in the tomb for years, and it was not long after that my good father followed him,—so of all my companions on my first coming to the Pacific coast, not one remains.”

“You could hardly have passed safely through the many dangers without the help of others,” suggested Mr. Starland.

“I admit that. No braver man than Micky McGuigan ever lived. He had the traditional Irishman’s love of a fight and he got plenty of it. But, Tom, our perils began, as you know, before we touched foot in California. Off the southern coast our steamer, the Western Star, was sunk in a collision. Teddy and I were left on the uninhabited coast (so far as white people are concerned), without so much as even a gun or pistol. Finding ourselves marooned, we struck into the interior, stole a couple of guns and some ammunition (what’s the use of denying it at this late day?) from some Indians, and then went it blindly.”

“I recall something of a partnership you made with an experienced miner.”

“Yes; good fortune brought us together, and it was a lucky thing indeed for us that we were picked up by Jo Harman, who piloted us through no end of dangers. We spent weeks in hunting for gold in what was then one of the wildest regions in the world.”

“We picked up a few particles, just enough to keep hope alive, but, in the end, had to give it up and take our chances in the diggings like the rest of the fortune hunters.”

“Well, Teddy, we have proved that there are other ways of getting treasure than by digging in the earth for it.”

“Yes, though it takes digging in any circumstances, and we had as hard times, at the beginning, as any of those who now dwell on Nob Hill.”

From the above brief conversation, you will recall the principal character whom you met in the story of “Teddy and Towser.” The lad who passed through more than one trying adventure had become a man well along in middle life....