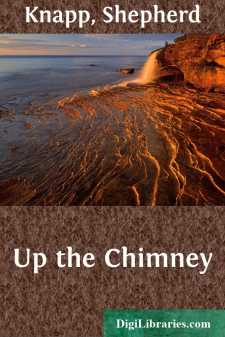 Before the curtain opens, MOTHER GOOSE comes out, and this is what she says:

Good evening, dear children. I see you are all expecting me to show you a Christmas Play. Well, I have one ready, sure enough. And now let me see, what shall I tell you about it? For one thing it will take place on Christmas Eve, and then it will be all about Christmas, of course. The first scene will be in the house, where a little girl and a little boy live, with their father, who is a doctor, and their mother. It is evening and the weather is very cold outside. The little girl and boy are writing letters—can you guess to whom they are writing?—and the mother is knitting, and the father is reading his newspaper; as you will see in a moment for yourselves. So be very quiet, for now it is going to begin.

Up The Chimney The First Scene

The curtain opens, and you see a room in a house and four people, just as Mother Goose promised. On one side is a fire-place, and notice the stockings hanging by it. At the back is a window, looking out into the street, but you cannot see anything there, because it is dark out of doors. The little girl's name is Polly, but the first one to speak is her brother, named JACK, who looks up from his letter and says:

Mother, how do you spell "friend"?

Yes, says JACK, still writing. Then he stops, straightens up and says, There! It's all done. Shall I read it to you, Mother?

Do, MOTHER answers. And Father puts down his newspaper to listen, and Polly stops writing. Mother goes on knitting, because she can knit and listen at the same time.

So JACK reads: "Dear Santa Claus, I have been very good this year—most of the time; and I wish you would bring me a toy soldier. I am very well and I hope you are. Your loving little friend, Jack." Is that all right, Mother?

It is a very good letter, says MOTHER; only I thought you were going to speak about that pair of warm gloves for Father.

Oh, I forget that, says JACK, looking a little bit ashamed. I'll put it in a postscript. So he goes on writing, and so does Polly. JACK says his words aloud while he writes them: "P.S.—Fa—ather—would—like—a—pair—of—warm—gloves."

MOTHER looks over at Polly, who seems to have finished, and says: Polly, let us hear your letter.

So POLLY reads: "Dear Santa Claus, I am so glad that tomorrow is Christmas. We have all hung up our stockings, and I think I would like best to have a doll in short dresses. I love you very much. Your little friend, Polly. P.S.—I think Mother would like a ball of white knitting cotton." I had to put that in a postscript, Mother, because I forgot, too.

And now FATHER, who has been listening all this time, says: Where will you put the letters?—on the mantel-piece or in the stockings?