Up The Baltic Young America in Norway, Sweden, and Denmark 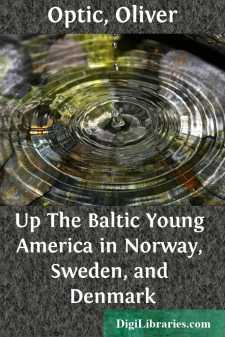 A WAIF ON THE NORTH SEA.

“Boat on the weather bow, sir!” shouted the lookout on the top-gallant forecastle of the Young America.

“Starboard!” replied Judson, the officer of the deck, as he discovered the boat, which was drifting into the track of the ship.

“Starboard, sir!” responded the quartermaster in charge of the wheel.

By this time a crowd of young officers and seamen had leaped upon the top-gallant forecastle, and into the weather rigging, to obtain a view of the little boat, which, like a waif on the ocean, was drifting down towards the coast of Norway. It contained only a single person, who was either a dwarf or a boy, for he was small in stature. He lay upon a seat near the stern of the boat, with his feet on the gunwale. He was either asleep or dead, for though the ship had approached within hail, he neither moved nor made any sign. The wind was light from the southward, and the sea was quite calm.

“What do you make of it, Ryder?” called the officer of the deck to the second master, who was on duty forward.

“It is a flat-bottomed boat, half full of water, with a boy in it,” answered Ryder.

“Hail him,” added the officer of the deck.

“Boat, ahoy!” shouted Ryder, at the top of his lungs.

The person in the boat, boy or man, made no reply. Ryder repeated the hail, but with no better success. The officers and seamen held their breath with interest and excitement, for most of them had already come to the conclusion that the occupant of the boat was dead. A feeling akin to horror crept through the minds of the more timid, as they gazed upon the immovable body in the dilapidated craft; for they felt that they were in the presence of death, and to young people this is always an impressive season. By this time the ship was within a short distance of the water-logged bateau. As the waif on the ocean exhibited no signs of life, the first lieutenant, in charge of the vessel, was in doubt as to what he should do.

Though he knew that it was the first duty of a sailor to assist a human being in distress, he was not sure that the same effort was required in behalf of one who had already ceased to live. Captain Cumberland, in command of the ship, who had been in the cabin when the excitement commenced, now appeared upon the quarter-deck, and relieved the officer of the responsibility of the moment. Judson reported the cause of the unwonted scene on deck, and as the captain discovered the little boat, just on the weather bow, he promptly directed the ship to be hove to.

“Man the main clew-garnets and buntlines!” shouted the first lieutenant; and the hands sprang to their several stations. “Stand by tack and sheet.”

“All ready, sir,” reported the first midshipman, who was on duty in the waist.

The well-trained crew promptly obeyed the several orders, and the mainsail was hauled up in much less time than it takes to describe the manœuvre....