Up from Slavery: an autobiography 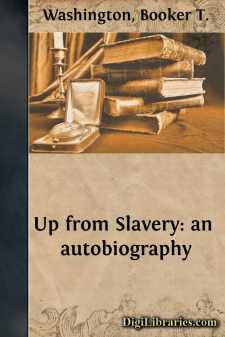 Add to My Favorites
Published: 9 years ago
Downloads: 100
Rating: (0 Votes)

The details of Mr. Washington's early life, as frankly set down in "Up from Slavery," do not give quite a whole view of his education. He had the training that a coloured youth receives at Hampton, which, indeed, the autobiography does explain. But the reader does not get his intellectual pedigree, for Mr. Washington himself, perhaps, does not as clearly understand it as another man might. The truth is he had a training during the most impressionable period of his life that was very extraordinary, such a training as few men of his generation have had. To see its full meaning one must start in the Hawaiian Islands half a century or more ago.* There Samuel Armstrong, a youth of missionary parents, earned enough money to pay his expenses at an American college. Equipped with this small sum and the earnestness that the undertaking implied, he came to Williams College when Dr. Mark Hopkins was president. Williams College had many good things for youth in that day, as it has in this, but the greatest was the strong personality of its famous president. Every student does not profit by a great teacher; but perhaps no young man ever came under the influence of Dr. Hopkins, whose whole nature was so ripe for profit by such an experience as young Armstrong. He lived in the family of President Hopkins, and thus had a training that was wholly out of the common; and this training had much to do with the development of his own strong character, whose originality and force we are only beginning to appreciate.

* For this interesting view of Mr. Washington's education, Iam indebted to Robert C. Ogden, Esq., Chairman of the Boardof Trustees of Hampton Institute and the intimate friend ofGeneral Armstrong during the whole period of his educationalwork.

In turn, Samuel Armstrong, the founder of Hampton Institute, took up his work as a trainer of youth. He had very raw material, and doubtless most of his pupils failed to get the greatest lessons from him; but, as he had been a peculiarly receptive pupil of Dr. Hopkins, so Booker Washington became a peculiarly receptive pupil of his. To the formation of Mr. Washington's character, then, went the missionary zeal of New England, influenced by one of the strongest personalities in modern education, and the wide-reaching moral earnestness of General Armstrong himself These influences are easily recognizable in Mr. Washington to-day by men who knew Dr. Hopkins and General Armstrong.

I got the cue to Mr. Washington's character from a very simple incident many years ago. I had never seen him, and I knew little about him, except that he was the head of a school at Tuskegee, Alabama. I had occasion to write to him, and I addressed him as "The Rev. Booker T. Washington." In his reply there was no mention of my addressing him as a clergyman. But when I had occasion to write to him again, and persisted in making him a preacher, his second letter brought a postscript: "I have no claim to 'Rev.'" I knew most of the coloured men who at that time had become prominent as leaders of their race, but I had not then known one who was neither a politician nor a preacher; and I had not heard of the head of an important coloured school who was not a preacher....