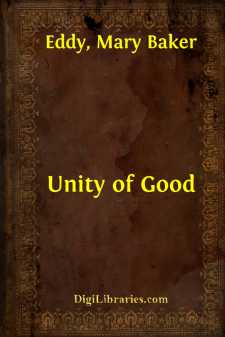 Caution in the Truth

Perhaps no doctrine of Christian Science rouses so much natural doubt and questioning as this, that God knows no such thing as sin. Indeed, this may be set down as one of the "things hard to be understood," such as the apostle Peter declared were taught by his fellow-apostle Paul, "which they that are unlearned and unstable wrest ... unto their own destruction." (2 Peter iii. 16.)

Let us then reason together on this important subject, whose statement in Christian Science may justly be characterized as wonderful.

Does God know or behold sin, sickness, and death?

The nature and character of God is so little apprehended and demonstrated by mortals, that I counsel my students to defer this infinite inquiry, in their discussions of Christian Science. In fact, they had better leave the subject untouched, until they draw nearer to the divine character, and are practically able to testify, by their lives, that as they come closer to the true understanding of God they lose all sense of error.

The Scriptures declare that God is too pure to behold iniquity (Habakkuk i. 13); but they also declare that God pitieth them who fear Him; that there is no place where His voice is not heard; that He is "a very present help in trouble."

The sinner has no refuge from sin, except in God, who is his salvation. We must, however, realize God's presence, power, and love, in order to be saved from sin. This realization takes away man's fondness for sin and his pleasure in it; and, lastly, it removes the pain which accrues to him from it. Then follows this, as the finale in Science: The sinner loses his sense of sin, and gains a higher sense of God, in whom there is no sin.

The true man, really saved, is ready to testify of God in the infinite penetration of Truth, and can affirm that the Mind which is good, or God, has no knowledge of sin.

In the same manner the sick lose their sense of sickness, and gain that spiritual sense of harmony which contains neither discord nor disease.

According to this same rule, in divine Science, the dying—if they die in the Lord—awake from a sense of death to a sense of Life in Christ, with a knowledge of Truth and Love beyond what they possessed before; because their lives have grown so far toward the stature of manhood in Christ Jesus, that they are ready for a spiritual transfiguration, through their affections and understanding.

Those who reach this transition, called death, without having rightly improved the lessons of this primary school of mortal existence,—and still believe in matter's reality, pleasure, and pain,—are not ready to understand immortality. Hence they awake only to another sphere of experience, and must pass through another probationary state before it can be truly said of them: "Blessed are the dead which die in the Lord."

They upon whom the second death, of which we read in the Apocalypse (Revelation xx. 6), hath no power, are those who have obeyed God's commands, and have washed their robes white through the sufferings of the flesh and the triumphs of Spirit. Thus they have reached the goal in divine Science, by knowing Him in whom they have believed. This knowledge is not the forbidden fruit of sin, sickness, and death, but it is the fruit which grows on the "tree of life." This is the understanding of God, whereby man is found in the image and likeness of good, not of evil; of health, not of sickness; of Life, not of death.

God is All-in-all. Hence He is in Himself only, in His own nature and character, and is perfect being, or consciousness....