Under the Ocean to the South Pole Or, the Strange Cruise of the Submarine Wonder 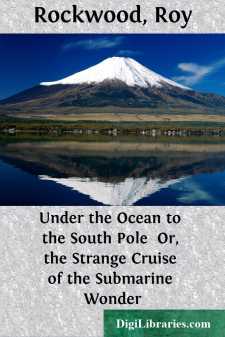 WILL THE SHIP WORK?

"Hand me that wrench, Mark," called Professor Amos Henderson to a boy who stood near some complicated machinery over which the old man was working. The lad passed the tool over.

"Do you think the ship will work, Professor?" he asked.

"I hope so, Mark, I hope so," muttered the scientist as he tightened some bolts on what was perhaps the strangest combination of apparatus that had ever been put together. "There is no reason why she should not, and yet—"

The old man paused. Perhaps he feared that, after all, the submarine boat on which he had labored continuously for more than a year would be a failure.

"Is there anything more I can do now?" asked Mark.

"Not right away," replied the professor, without looking up from the work he was doing. "But I wish you and Jack would be around in about an hour. I am going to start the engine then, and I'll need you. If you see Washington outside send him to me."

Mark left the big room where the submarine boat had been in process of construction so long. Outside he met a boy about his own age, who was cleaning a rifle.

"How's it going, Mark?" asked this second youth, who was rather fat, and, if one could judge by his face, of a jolly disposition.

"The professor is going to try the engine in about an hour," replied Mark. "We must be on hand."

"I'll be there all right. But if there isn't anything else to do, let's shoot at a target. I'll bet I can beat you."

"Now don't yo' boys go to disportin' yo'seves in any disproportionable anticipation ob transposin' dem molecules of lead in a contigious direction to yo' humble servant!" exclaimed a colored man, coming from behind the big shed at that moment, and seeing Mark and Jack with their rifles.

"I s'pose you mean to say, Washington," remarked Jack, "that you don't care to be shot at. Is that it?"

"The professor wants you," interrupted Mark, cutting off the colored man's flow of language.

"Yo' mind what I tole yo'," Washington muttered as he hurried into the work room.

Soon the reports of rifles indicated that the boys were trying to discover who was the best shot, a contest that waged with friendly interest for some time.

The big shed, where the submarine ship was being built, was located at a lonely spot on the coast of Maine. The nearest town was Easton, about ten miles away, and Professor Henderson had fixed on this location as one best suited to give him a chance to work secretly and unobserved on his wonderful invention.

The professor was a man about sixty-five years old, and, while of simple and kindly nature in many ways, yet, on the subjects of airships and submarines, he possessed a fund of knowledge. He was somewhat queer, as many persons may be who devote all their thoughts to one object, yet he was a man of fine character.

Some time before this story opens he had invented an electric airship in which he, with Mark Sampson, Jack Darrow and the colored man, Washington White, had made a trip to the frozen north....