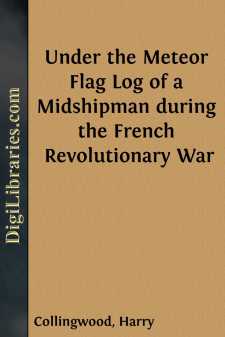 On board the “Scourge.”

On the 9th of March, 1793, his Britannic Majesty’s gun-brig “Scourge” weighed, and stood out to sea from the anchorage at Spithead, under single-reefed topsails, her commander having received orders to cruise for a month in the chops of the Channel. The “Scourge” was a 16-gun brig, but having been despatched to sea in a great hurry, after receiving somewhat extensive repairs at the dockyard, she had only eight long 6-pounders mounted, and, for the same reason, she was considerably short-handed, her crew amounting only to seventy men and boys, of whom quite one half were eminently “green” hands. War with France had just been once more declared, the various dockyards were busy night and day preparing and turning out ships for service, and the officers were glad to get hold of almost any class of men for their ships, provided only that they were strong and able-bodied.

In this dashing little brig, I—Ralph Chester—held the exalted and responsible post of midshipman; my appointment, on the morning in question, being exactly one week old. I had only joined the ship, however, three days before, and in the interval had been made the victim of almost every practical joke which the ingenuity of my fellow-mids could devise. It is not my purpose to recount these tricks, for stirring times were at hand, and adventures of a sterner and far more interesting nature were to meet me at the very outset of my career, crowding thick and fast upon each other’s heels; and it is in the recital of these adventures that I hope to excite and gratify the curiosity of my readers. A few—and only a few—words are necessary by way of personal introduction. My father—the Reverend Henry Chester—was rector of the parish of —, which, as everybody knows, enjoys the advantage of being located in the heart of the loveliest scenery in Hampshire. Our family was not a large one; there were only four of us—two boys and two girls—exclusive of my parents; which was a decidedly fortunate circumstance, for if my father’s family was moderate, his income was still more so, and my poor mother’s ingenuity was often taxed to the utmost to make both ends meet, and at the same time maintain for us all such outward tokens of respectability as became the rector’s family.

My elder brother, Henry, was destined to follow in the paternal footsteps by entering the church. My sisters Florence and Amy (my juniors respectively by two and four years) would, it was hoped, contract in due time suitable marriages, with the friendly aid and countenance of some of our more wealthy relations; and, for myself, my dear father was most anxious that I should devote the few abilities with which I had been endowed by nature to the study of the law. Personally about the most unambitious man who ever lived, my father’s ambition for his children was absolutely boundless; and I believe, could the truth have been arrived at, he quite hoped in course of time to see his sons, the one Primate of England, and the other in possession of the woolsack....