Under the Great Bear 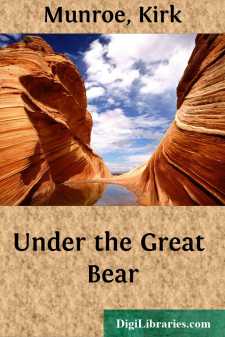 CHAPTER I. GRADUATION: BUT WHAT NEXT?

"Heigh-ho! I wonder what comes next?" sighed Cabot Grant as he tumbled wearily into bed.

The day just ended marked the close of a most important era in his life; for on it he had been graduated from the Technical Institute, in which he had studied his chosen profession, and the coveted sheepskin that entitled him to sign M.E. in capital letters after his name had been in his possession but a few hours.

Although Cabot came of an old New England family, and had been given every educational advantage, he had not graduated with honours, having, in fact, barely scraped through his final examination. He had devoted altogether too much time to athletics, and to the congenial task of acquiring popularity, to have much left for study. Therefore, while it had been pleasant to be one of the best-liked fellows in the Institute, captain of its football team, and a leading figure in the festivities of the day just ended, now that it was all over our lad was regretting that he had not made a still better use of his opportunities.

A number of his classmates had already been offered fine positions in the business world now looming so ominously close before him. Little pale-faced Dick Chandler, for instance, was to start at once for South Africa, in the interests of a wealthy corporation. Ned Burnett was to be assistant engineer of a famous copper mine; a world-renowned electrical company had secured the services of Smith Redfield, and so on through a dozen names, no one of which was as well known as his, but all outranking it on the graduate list of that day.

Cabot had often heard that the career of Institute students was closely watched by individuals, firms, and corporations in need of young men for responsible positions, and had more than once resolved to graduate with a rank that should attract the attention of such persons. But there had been so much to do besides study that had seemed more important at the time, that he had allowed day after day to slip by without making the required effort, and now it appeared that no one wanted him.

Yes, there was one person who had made him a proposition that very day. Thorpe Walling, the wealthiest fellow in the class, and one of its few members who had failed to gain a diploma, had said:

"Look here, Grant, what do you say to taking a year's trip around the world with me, while I coach for a degree next June? There is no such educator as travel, you know, and we'll make a point of going to all sorts of places where we can pick up ideas. At the same time it'll be no end of a lark."

"I don't know," Cabot had replied doubtfully, though his face had lighted at the mere idea of taking such a trip. "I'd rather do that than almost anything else I know of, but——"

"If you are thinking of the expense," broke in the other.

"It isn't that," interrupted Cabot, "but it seems somehow as though I ought to be doing something more in the line of business. Anyway, I can't give you an answer until I have seen my guardian, who has sent me word to meet him in New York day after to-morrow....