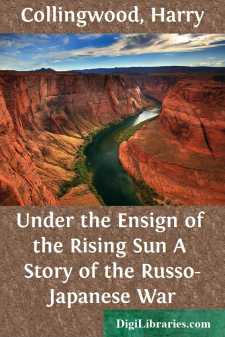 Chapter One. Dismissed the Service.

“Well, good-bye, old chap; keep a stiff upper lip, and hope for the best; the truth is pretty sure to come out some day, somehow, and then they will be bound to reinstate you. And be sure you call on the Pater, and tell him the whole yarn. I’ll bet he will be able to give you some advice worth having. Also give my love to the Mater, and tell her that I’m looking forward to Christmas. Perhaps I may see you then. Good-bye again, and good luck to you.”

The speaker was young Ronald Gordon, one of the midshipmen belonging to H.M.S. Terrible, and my particular chum; and the words were spoken as we parted company on the platform of Portland railway station, Gordon to return to his ship, while I, an outcast, was bound for London to seek my fortune.

Yes; after doing splendidly at Dartmouth, heading the list at the passing-out exam, and so at once gaining the rating of midshipman; doing equally well afloat during the subsequent three years and a half, qualifying for Gunnery, Torpedo, and Navigating duties, serving for six months aboard a destroyer, and everywhere gaining the esteem and goodwill of my superiors, here was I, Paul Swinburne, at the age of seventeen and a half, an outcast kicked out of the Navy with ignominy and my career ruined, through the machinations of another, and he my cousin!

He, Bob Carr,—like myself, a midshipman aboard the Terrible,—had committed a crime of a particularly mean and disgraceful character—there is no need for me to specify its precise nature—and with diabolical ingenuity, knowing that discovery was inevitable, had succeeded in diverting suspicion so strongly toward me that I had been accused, court martialled, and—although I had pleaded not guilty—found guilty and dismissed the Service.

Now, it is necessary for me to say here just a word or two in self-defence; for there is no reason whatever why the reader should be allowed to believe me guilty, although, for certain reasons of my own, I permitted the officers who tried me to think so.

I am an orphan, both my parents having died within a few months of each other when I was less than three years old, leaving me to the mercy of the world. My nearest relation was Aunt Betsy Carr, my father’s only sister, and at my mother’s death she and Uncle Bob adopted me as their own, although they had a baby boy of their own, at that time nearly two years old—the Cousin Bob who was responsible for my present trouble. They took me not only into their home but also into their hearts; they made not the slightest difference in their treatment of Bob and me; I was as much a son to them as he was; and the result was that I soon grew to love them both as much as though they had been my own parents.

At first, as children, Bob and I got on splendidly together; but later on, when we were respectively about seven and eight years of age, my cousin gradually developed a feeling of jealousy that at length became inordinate—although he was very careful to conceal the fact from his parents; so that when, in my second year at Dartmouth, the matter of sending him there also was mooted, I was exceedingly sorry, although I of course gladly promised to help him to the utmost, in the event of his being entered....