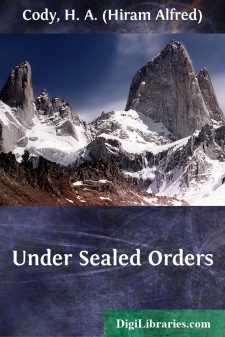 CHAPTER I THE LURE OF FALLING WATER

It was evening and a late April wind was whipping down the valley. It swayed the tops of the tall pine and spruce trees as they shouldered up from the swift brook below. It tossed into driving spray the water of Break Neck Falls where it leaped one hundred feet below with a thundering roar and swirl. It tossed as well the thin grey hair, long beard, and thread-bare clothes of an old man standing upon a large rock which towered high above the stream.

The entire scene was wild and made weird by the approach of night. But the old man did not seem to notice anything except the falling of the waters. His eyes glowed with an intense light as he kept them fixed upon the leaping and swirling columns below. His face was like the face of a lover turned toward the object of his affection.

For some time the man stood there drinking in the scene before him. Then he took a step forward which brought him perilously near the edge of the steep rock. His lips moved though no sound could be heard for the tumult of the falls which was rending the air. What connection had such a man with his surroundings? No boor or clown was he, for the simple dignity of face and manner marked him as one of Nature's true gentlemen.

It was almost dark when he at last reluctantly left the rock and entered the thick woods where a trail led away from the falls. Along this he moved with the unerring instinct of one who had travelled it often and was sure of his bearings. But ever and anon he paused to listen to the sound of the falling waters which followed him like the voice of a loved one urging him to return.

"Yes, you want me," he at length cried, as he once more paused. "I hear your voice calling, and I know its meaning. Others need you, too, but they do not know it. You have been calling to them for years, but they have not understood your language. It was left for me to listen and take heed. They will some day, and then you will show your power. I can see what you will do, beautiful falls, and the changes which will come to this fair land when your luring voice is heeded."

He stood for awhile as if entranced after uttering these mystic words. Then he continued on his way and night wrapped more closely about him her dark mantle. He had to walk very cautiously now for the trail was rough, and there were sharp stones and roots ready to strike his feet and trip him up.

At length the trail ended and he reached the smooth surface of the broad highway. Along this he sped with the quick elastic step of one who has seen a vision. The fire of a great idea was burning fiercely within him which caused him to take no heed to his surroundings.

He had not gone far, however, ere some strong impulse caused him to pause again and listen to that fascinating sound of falling waters far off in the distance. It was on an elevation in the road where he stopped, and here the shadows which enwrapped the forest were not so heavy. The lingering light of departing day was still in the west and touched this part of the highway with its faint glow....