Under Drake's Flag A Tale of the Spanish Main 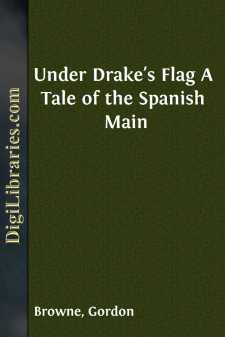 Chapter 1: The Wreck on the Devon Coast.

It was a Stormy morning in the month of May, 1572; and the fishermen of the little village of Westport, situate about five miles from Plymouth, clustered in the public house of the place; and discussed, not the storm, for that was a common topic, but the fact that Master Francis Drake, whose ships lay now at Plymouth, was visiting the Squire of Treadwood, had passed through the village over night, and might go through it again, today. There was not one of the hardy fishermen there but would gladly have joined Drake's expedition, for marvellous tales had been told of the great booty which he, and other well-known captains, had already obtained from the Dons on the Spanish Main. The number, however, who could go was limited, and even of these the seafaring men were but a small proportion; for in those days, although a certain number of sailors were required to trim the sails and navigate the ship, the strength of the company were the fighting men, who were soldiers by trade, and fought on board ship as if on land.

Captain Drake was accompanied by many men of good Devon blood, for that county was then ahead of all England in its enterprise, and its seamanship; and no captain of name or repute ever had any difficulty in getting together a band of adventurers, from the sturdy population of her shores.

"I went over myself, last week," said a finely-built young sailor, "and I prayed the captain, on my knees, to take me on board; but he said the tale had been full, long ago; and that so many were the applicants that Master Drake and himself had sworn a great oath, that they would take none beyond those already engaged."

"Aye! I would have gone myself," said a grizzly, weatherbeaten old sailor, "if they would have had me. There was Will Trelawney, who went on such another expedition as this, and came back with more bags of Spanish dollars than he could carry. Truly they are a gold mine, these Western seas; but even better than getting gold is the thrashing of those haughty Spaniards, who seem to look upon themselves as gods, and on all others as fit only to clean their worships' boots."

"They cannot fight neither, can they?" asked a young sailor.

"They can fight, boy, and have fought as well as we could; but, somehow, they cannot stand against us, in those seas. Whether it is that the curse of the poor natives, whom they kill, enslave, and ill treat in every way, rises against them, and takes away their courage and their nerve; but certain is it that, when our little craft lay alongside their big galleons, fight as they will, the battle is as good as over. Nothing less than four to one, at the very least, has any chance against our buccaneers."

"They ill treat those that fall into their hands, do they not?"

"Ay, do they!" said the old sailor. "They tear off their flesh with hot pincers, wrench out their nails, and play all sorts of devil's games; and then, at last, they burn what is left of them in the marketplaces. I have heard tell of fearsome tales, lad; but the Spaniards outwit themselves....