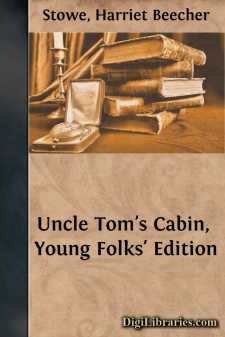 Add to My Favorites
Published: 8 years ago
Downloads: 81
Rating: (0 Votes)

CHAPTER I UNCLE TOM AND LITTLE HARRY ARE SOLD

ERY many years ago, instead of having servants to wait upon them and work for them, people used to have slaves. These slaves were paid no wages. Their masters gave them only food and clothes in return for their work.

When any one wanted servants he went to market to buy them, just as nowadays we buy horses and cows, or even tables and chairs.

If the poor slaves were bought by kind people they would be quite happy. Then they would work willingly for their masters and mistresses, and even love them. But very often cruel people bought slaves. These cruel people used to beat them and be unkind to them in many other ways.

It was very wicked to buy and sell human beings as if they were cattle. Yet Christian people did it, and many who were good and kind otherwise thought there was no wrong in being cruel to their poor slaves. 'They are only black people,' they said to themselves. 'Black people do not feel things as we do.' That was not kind, as black people suffer pain just in the same way as white people do.

One of the saddest things for the poor slaves was that they could never long be a happy family all together—father, mother, and little brothers and sisters—because at any time the master might sell the father or the mother or one of the children to some one else. When this happened those who were left behind were very sad indeed—more sad than if their dear one had died.

Uncle Tom was a slave. He was a very faithful and honest servant, and his master, Mr. Shelby, was kind to him. Uncle Tom's wife was called Aunt Chloe. She was Mr. Shelby's head cook, and a very good one too, she was. Nobody in all the country round could make such delicious pies and cakes as Aunt Chloe.

Uncle Tom and Aunt Chloe lived together in a pretty little cottage built of wood, quite close to Mr. Shelby's big house.

The little cottage was covered with climbing roses, and the garden was full of beautiful bright flowers and lovely fruit trees.

Uncle Tom and Aunt Chloe lived happily for many years in their little cottage, or cabin, as it was called. All day Uncle Tom used to work in the fields, while Aunt Chloe was busy in the kitchen at Mr. Shelby's house. When evening came they both went home to their cottage and their children, and were merry together.

Mr. Shelby was a good man, and kind to his slaves, but he was not very careful of his money. When he had spent all he had, he did not know what to do to get more. At last he borrowed money from a man called Haley, hoping to be able to pay it back again some day.

But that day never came. Haley grew impatient, and said, 'If you don't pay what you owe me, I will take your house and lands, and sell them to pay myself back all the money I have lent to you.'

So Mr. Shelby sold everything he could spare and gathered money together in every way he could think of, but still there was not enough.

Then Haley said, 'Give me that slave of yours called Tom—he is worth a lot of money.'

But Mr. Shelby knew that Haley was not a nice man....