Uncle Sam's Boys in the Ranks or, Two Recruits in the United States Army 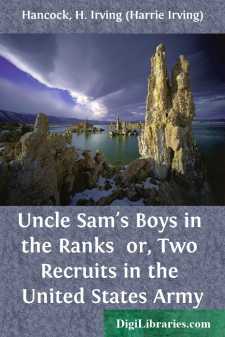 CHAPTER I A LESSON IN RESPECT FOR THE UNIFORM "AW, what's the difference between a soldier and a loafer?" demanded "Bunny" Hepburn.

"A soldier ain't a loafer, and it takes nerve to be a soldier. It's a job for the bravest kind of a man," retorted Jud Jeffers indignantly.

"It ain't a decent conundrum," retorted Jud, with dignity, for his father had served as a volunteer soldier in the war with Spain.

"Go on, Bunny," broke in another boy in the group, laughing. "I'll be the goat. What is the difference between a soldier and a loafer?"

"A soldier gets paid and fed, and the other loafer doesn't," retorted Bunny, with a broadening grin. A moment later, when he realized that his "joke" had failed to raise a laugh, Bunny looked disappointed.

"Aw, go on," flared up Jud Jeffers. "You don't know anything about a soldier."

"But my dad does," retorted Bunny positively. "Dad says soldiers don't produce anything for a living; that they take their pay out of the pockets of the public, and then laugh at the public for fools."

"And what does your father do for a living?" demanded Jud hotly.

"He's a man who knows a lot, and he lectures," declared Bunny, swelling with importance. "When my dad talks a whole lot of men get excited and cheer him."

"Yes, and they buy him beer, too," jeered Jud, hot with derision for the fellow who was running down the soldiers of the United States. "Your father does his lecturing in small, dirty halls, where there's always a beer saloon underneath. You talk about men being producers—and your father goes around making anarchistic speeches to a lot of workingmen who are down on everything because they aren't clever enough to earn as good wages as sober, industrious and capable workmen earn."

"Speech, Jud!" laughingly roared another boy in the crowd that now numbered a score of youngsters.

"Don't you dare talk against my dad!" sputtered Bunny, doubling his fists and trying to look fierce.

"Then don't say anything against soldiers," retorted Jud indignantly. "My father was one. I tell you, soldiers are the salt of the earth."

"Say, but they're a fine and dandy-looking lot, anyway," spoke up Tom Andrews, as he turned toward the post-office window in front of which the principal actors in this scene were standing. The place was one of the smaller cities in New Jersey.

In the post-office window hung a many-colored poster, headed "Recruits Wanted for the United States Army." Soldiers of the various arms of the service were shown, and in all the types of uniforms worn on the different occasions.

This opinion might not have gotten him into trouble, but he emphasized his opinion by spitting straight at the glass over the center of the picture.

Jud Jeffer's fist shot out, with all the force there is in fourteen-year-old muscle. The fist caught Bunny Hepburn on the side of the face and sent him sprawling....