Uncle Sam's Boys in the Philippines or, Following the Flag against the Moros 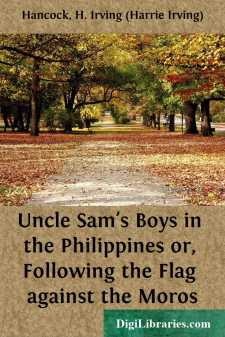 But Hal, becoming only the more serious, went on earnestly:

"At last we begin to understand just what the 'lure of the Orient' means! For years I've been reading about the Orient, and the way that this part of the world charms men and holds them. Now, that we are here on the spot, I begin to understand it all. Noll, my boy, the East is a great and wonderful place! I wonder if I shall ever tire of it?"

"I believe I could tire of it in time," remarked Sergeant Terry, of the Thirty-fourth United States Infantry.

"But you haven't yet," insisted Sergeant Hal.

"What, when we've been here only three days? Naturally I haven't. And, besides, all we've seen is Manila, and certainly Manila can't be more than one little jumping-off corner of the Orient that you're so enthusiastic about."

"You're wild about the Far East, too—even the one little corner of it that we've seen," retorted Sergeant Hal. "Don't be a grouch or a knocker, Noll. Own up that you wouldn't start for the United States to-morrow if you were offered double pay back in the home country."

"No; I wouldn't," confessed Sergeant Terry. "I want to see a lot more of these Philippine Islands before I go back to our own land."

"Just halt where you are and look about you," went on enthusiastic Sergeant Hal. "Try to picture this scene as Broadway, in New York."

"Or Main Street in our own little home city," laughed Sergeant Terry quietly.

Certainly the scene was entirely different from anything that the two young Army boys had ever seen before.

They stood on the Escolta, which is the main business thoroughfare of New Manila, as that portion of the Philippine capital north of the little river is called. South of the river is Old Manila, the walled city of the old days of the Spanish conquerors. South of the walled city lie two rather fashionable residence suburbs, Ermita and Malate.

But the Thirty-fourth was temporarily stationed in big nipa barracks at Malate. It was in the newer Manila that the two boyish young sergeants found their greatest interest.

It was a busy, bustling scene. There is nothing exactly like the Escolta in any other part of the world. The whole of this crooked, winding thoroughfare seemed alive with horses and people—with the horses in more than goodly proportion.

Along the Escolta are the principal wholesale and retail houses of the city. Here is the post office, there the "Botanica" or principal drug store, operating under English capital and a Spanish name; down near the water front is the Hotel de Paris, a place famous for the good dinners of the East. Further up the Escolta, just around a slight bend, is the Oriente Hotel, the stopping place of Army officers and their families, of passing travelers and of civil employees of the government.

At this point along the Escolta are the busiest marts of local trade. The sidewalks are crowded with hurrying throngs; the streets jammed with traffic, for in Manila few of the whites or the wealthier natives ever think of walking more than a block or two....