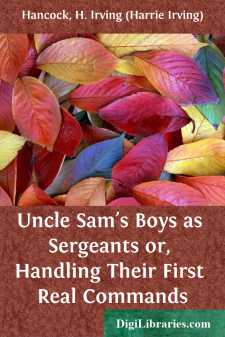 CHAPTER I "TIPPED OFF" BY WIG-WAG LIEUTENANT POPE, battalion adjutant of the first battalion of the Thirty-fourth United States Infantry, looked up from his office desk as the door swung open and a smart, trim-looking young corporal strode in.

Pausing before the desk, the young corporal came to a precise, formal salute. Then, dropping his right hand to his side, the soldier stood at attention.

"I have been making inquiries, sir," continued Corporal Hal Overton, "and I am informed that you have some signaling flags among the quartermaster's stores."

"I believe I have," nodded Lieutenant Pope.

"I have come to ask, sir, if I may borrow a couple of the flags."

"Borrow? Then, Corporal, I take it that you do not want the flags for duty purposes?"

"Not immediately for duty purposes, sir. Corporal Terry and myself would like to practise at wig-wagging until we become reasonably expert. Sergeant Hupner is an expert at wig-wagging, I understand."

"Yes, indeed," agreed Lieutenant Pope heartily. "Even in the Signal Corps of the Army there are few better signalmen than the sergeant."

"So I understand, sir. Corporal Terry and I are delighted at the idea of having the sergeant instruct us."

"But what do you want to do, especially, with flag signaling?" inquired the quartermaster.

"It is simply, sir, that we want to make ourselves better soldiers."

"It is rarely that we find better soldiers than Terry and yourself," replied the quartermaster, with a friendly smile. "But you are quite right, none the less. A soldier can never know too much of military duties. I see no objection whatever to your having the flags, but as they are not a matter of ordinary issue, I think it better for me to seek Major Silsbee's authority for issuing them."

"Would it have been better if I had gone to the battalion commander in the first place, sir?"

"No; whenever you wish anything in the Army it is usually better to go direct to the officer who has that thing in charge in his department, save when it is something that you are expected to draw through your company officers."

"It was Captain Cortland who sent me to you, sir, but he said he had no authority to draw a requisition for signal flags."

"You have taken the right course, Corporal. If Major Silsbee is in his office it will take but a moment more."

While the young corporal remained at attention Lieutenant Pope turned to his telephone and called for the battalion commander.

"It's all right, Corporal," nodded the lieutenant, hanging up the receiver. Then he wrote on a slip of official paper. "Here is an order on which the quartermaster sergeant will issue you two signal flags. You are, of course, responsible for the flags, or for the value."

Five minutes later Corporal Hal Overton stepped briskly from the building in which the quartermaster's stores were kept. Under his left arm he carried two signal flags, rolled and attached to short staffs....