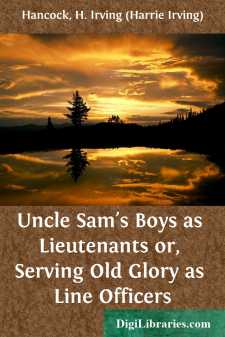 "That's an odd complaint to hear from a young man who served so actively for two years in the tropics," laughed Mrs. Overton, a short, plump, middle-aged matron.

"Well, Mother, it is a hot day," put in Sergeant Hal Overton quietly.

"Yes, it is," agreed Hal's mother, "though you two, who came from the Philippines the very picture of health can't feel the weather to-day much. New Jersey isn't in the tropics."

Hal's mother said that with an air of finality. Her son and his chum had been through the most strenuous forms of active army service in Uncle Sam's colonial possessions, the Philippine Islands. If they could endure the heat in that tropical belt, even that day's broiling weather at home must seem cool by comparison.

"I suppose you have an idea, Mother, that the nearer you go to the equator the hotter the weather gets."

"It may be, as far as actual degrees of heat are marked off on the thermometer," explained Sergeant Hal. "But I'll stick to it, Mother, that the average of weather that we struck in the Philippines was not nearly so disagreeable as the weather is here to-day."

"I don't pretend to understand it, either, Mother," Hal continued. "But it's a fact that there are very few spots in the actual tropics that seem so disagreeable as are New York City and some places in New Jersey in the heated terms of July and August."

"That astonishes me," declared Mrs. Overton. "I have always supposed that, the further south one goes in summer, the hotter one finds it. So New York City is hotter in summer than the tropics?"

The boys were more or less inclined to joke Mrs. Overton, because, while there are many pleasant days in the tropics, particularly near the coast, the weather is for the most part undeniably hot and oppressive.

"Anyhow," remarked Noll, philosophically, "the hardest thing we have to do here is to walk a short distance down the street and buy another ice cream."

"Henry!" cried his mother reproachfully. She was sure to be hurt or angry when she addressed him so formally. "Don't you care anything about being at home, after you've been away from us for more than three years?"

"Of course I care about being home, Mother," Sergeant Hal made haste to rejoin, as he rose, went over and kissed her. "But I don't believe you can gain a hundredth of an idea as to the suspense Noll and I are under at present. When we get our orders from the War Department we'll know—one way or the other."

"Oh, you're safe enough for your commission as second lieutenant, Hal," Noll broke in. "I only wish I felt half as safe for myself as I do for you."

"It doesn't seem fair that you shouldn't both get your commissions as second lieutenants," murmured Mrs. Overton. "You're both certain that you passed your final examinations at Fort Leavenworth."

"We'd both get our commissions, Mother, if there were vacancies enough. However, this year fifty-nine young soldiers passed their final examinations, and there are only forty-two vacancies to be filled from the ranks. Consequently, seventeen of us——"

"It isn't fair," broke in Mrs. Overton, with all a mother's logic where her son is concerned. "All of you who passed ought to be appointed officers in the Army."

"Seventeen of us won't be," sighed Hal.

Ever since their first enlistment Hal and Noll had been imbued with the ambition to rise from the ranks, and become officers. This promotion from the ranks is not as simple a matter as young people might gain from reading the stories of some misinformed authors who know nothing of actual military service....