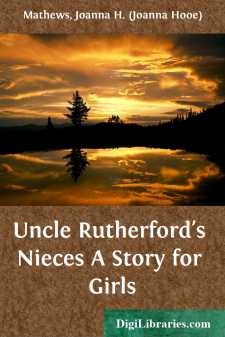 A sunny and a dark head, both bent over a much-befigured, much-besmeared slate, the small brows beneath the curls puckered,—the one in perplexity, the other with sympathy; opposite these two a third head whose carrotty hue betrayed it to be Jim's, although the face appertaining thereto was hidden from my view, as its owner, upon his hands and knees, also peered with interest at the slate. Wanderer, familiarly known as "Wand,"—the household dog, and the inseparable companion of my little sisters,—lay at their feet, as they sat upon a low rustic seat, manufactured for their special behoof by the devoted Jim; its chief characteristic being a tendency to upset, unless the occupant or occupants maintained the most exact balance, a seat not to be depended upon by the unwary or uninitiated, under penalty of a disagreeable surprise. To Allie and Daisy, however, it was a work of art, and left nothing to be desired, they having become accustomed to its vagaries.

Such was the picture which presented itself to my view as I came out on the piazza of our summer-home by the sea, and from that point of vantage looked down upon the little group on the lawn below.

But the problem upon which all three were intent had evidently proved too much for the juvenile arithmeticians; and, as I looked, Allie pushed the slate impatiently from her, saying,—

"Now, Miss Allie! an' you with lessons every day," said Jim reproachfully. "Should think you might make it out."

"I'm not so very grown up, Jim," answered the little girl; "and I've not gone so very far in the 'rithmetic; and I'm sure this kind of a sum must be in the very back part of the book."

"Here comes Bill," said Jim, as a boy of his own age and social standing appeared around the corner of the house, a tin pail in one hand, a shrimp-net in the other. "Maybe he'll know. Mr. Edward's taught him lots of figgerin'. Come on, Bill, an' help me an' Miss Allie make out this sum. You ought to know it, bein' a Wall-street man."

Allie said nothing; but I saw a slight elevation of her little head and a pursing of her rosy lips, which told me that she did not altogether relish the idea that a servant-boy might possess superior knowledge to herself, although he might be nearly double her age. Allie's sense of class distinctions was strong.

Having faith in his own attainments, however, the "Wall-street man"—this was the liberal interpretation put by Jim upon his position as office-boy to brother Edward—deposited his pail and net upon the ground, and himself in a like humble position beside his fellow-servant and chum. He might be learned, but he was not proud by reason thereof.

"It's Jim's sum; and I can't see a bit of sense in it, even when it's down on the slate," answered Allie, still in a somewhat aggrieved tone. "He's as mixed up as a—as a—any thing," she concluded hastily, at a loss for a simile of sufficient force....