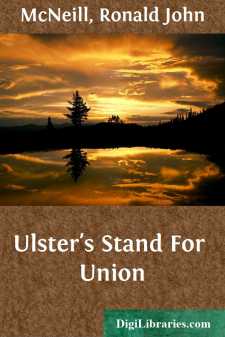 CHAPTER I INTRODUCTION: THE ULSTER STANDPOINT

Like all other movements in human affairs, the opposition of the Northern Protestants of Ireland to the agitation of their Nationalist fellow-countrymen for Home Rule can only be properly understood by those who take some pains to get at the true motives, and to appreciate the spirit, of those who engaged in it. And as it is nowhere more true than in Ireland that the events of to-day are the outcome of events that occurred longer ago than yesterday, and that the motives of to-day have consequently their roots buried somewhat deeply in the past, it is no easy task for the outside observer to gain the insight requisite for understanding fairly the conduct of the persons concerned.

It was Mr. Asquith who very truly said that the Irish question, of which one of the principal factors is the opposition of Ulster to Home Rule, "springs from sources that are historic, economic, social, racial, and religious." It would be a hopeless undertaking to attempt here to probe to the bottom an origin so complex; but, whether the sympathies of the reader be for or against the standpoint of the Irish Loyalists, the actual events which make up what may be called the Ulster Movement would be wholly unintelligible without some introductory retrospect. Indeed, to those who set out to judge Irish political conditions without troubling themselves about anything more ancient than their own memory can recall, the most fundamental factor of all—the line of cleavage between Ulster and the rest of the island—- is more than unintelligible. In the eyes of many it presents itself as an example of perversity, of "cussedness" on the part of men who insist on magnifying mere differences of opinion, which would be easily composed by reasonable people, into obstacles to co-operation which have no reality behind them.

Writers and speakers on the Nationalist side deride the idea of "two nations" in Ireland, calling in evidence many obvious identities of interest, of sentiment, or of temperament between the inhabitants of the North and of the South. The Ulsterman no more denies these identities than the Greek, the Bulgar, and the Serb would deny that there are features common to all dwellers in the Balkan peninsula; but he is more deeply conscious of the difference than of the likeness between himself and the man from Munster or Connaught. His reply to those who denounced the Irish Government Act of 1920 on the ground that it set up a "partition of Ireland," is that the Act did not "set up," but only recognised, the partition which history made long ago, and which wrecked all attempts to solve the problem of Irish Government that neglected to take it into account. If there be any force in Renan's saying that the root of nationality is "the will to live together," the Nationalist cry of "Ireland a Nation" harmonises ill with the actual conditions of Ireland north and south of the Boyne. This dividing gulf between the two populations in Ireland is the result of the same causes as the political dissension that springs from it, as described by Mr....