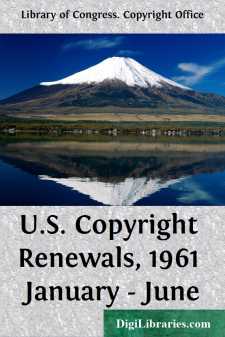 A list of books, pamphlets, serials, and contributions to periodicals for which renewal registrations were made during the period covered by this issue. Arrangement is alphabetical under the name of the author or issuing body or, in the case of serials and certain other works, by title. Information relating to both the original and renewal registration is included in each entry. References from the names of renewal claimants, joint authors, editors, etc. and from variant forms of names are interfiled. Certain registrations have been made under the Austrian Copyright Extension Proclamation of June 15, 1960, authorizing citizens of Austria whose works became eligible for renewal on or after March 13, 1938 and prior to July 27, 1956 (a period of disruption of facilities for compliance with U.S. requirements) to register such claims within one year from the date of the proclamation.

Whether a dove or seagull. SEE    Warner, Sylvia Townsend.