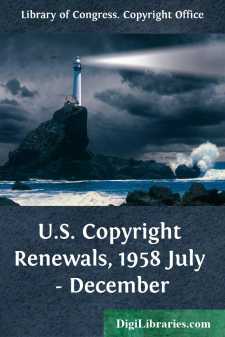 A list of books, pamphlets, serials, and contributions to periodicals for which renewal registrations were made during the period covered by this issue. Arrangement is alphabetical under the name of the author or issuing body or, in the case of serials and certain other works, by title. Information relating to both the original and the renewal registration is included in each entry. References from the names of renewal claimants, joint authors, editors, etc. and from variant forms of names are interfiled.

Bonners; being a collection of schoolboy wisdom or knowledge as it is sometimes written, compiled from classrooms and examination papers. Illustrated by Dr. Seuss. © 7Feb31; A34362. Viking Press, Inc. (PWH); 19Nov58; R225015.