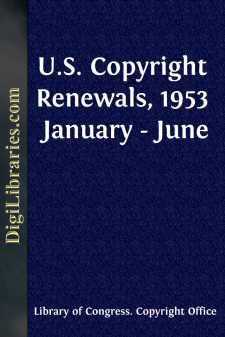 An alphabetical list, under main headings (author, editor, compiler, etc., or title), of works in Class A for which the renewal copyright was registered during the period covered by this catalog. Joint authors, editors, etc., are represented by cross-references leading to the respective main headings. Information relating to both the original and renewal registrations is included in each entry.

Trustees under the Will of Mary Baker Eddy.