Types of Weltschmerz in German Poetry 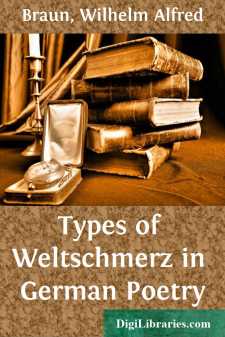 The purpose of the following study is to examine closely certain German authors of modern times, whose lives and writings exemplify in an unusually striking degree that peculiar phase of lyric feeling which has characterized German literature, often in a more or less epidemic form, since the days of "Werther," and to which, at an early period in the nineteenth century, was assigned the significant name "Weltschmerz."

With this side of the poet under investigation, there must of necessity be an enquiry, not only into his writings, his expressed feelings, but also his physical and mental constitution on the one hand, and into his theory of existence in general on the other. Psychology and philosophy then are the two adjacent fields into which it may become necessary to pursue the subject in hand, and for this reason it is only fair to call attention to the difficulties which surround the student of literature in discussing philosophical ideas or psychological phenomena. Intrepid indeed would it be for him to attempt a final judgment in these bearings of his subject, where wise men have differed and doctors have disagreed.

Although sometimes loosely used as synonyms, it is necessary to note that there is a well-defined distinction between Weltschmerz and pessimism. Weltschmerz may be defined as the poetic expression of an abnormal sensitiveness of the feelings to the moral and physical evils and misery of existence—a condition which may or may not be based upon a reasoned conviction that the sum of human misery is greater than the sum of human happiness. It is usually characterized also by a certain lack of will-energy, a sort of sentimental yielding to these painful emotions. It is therefore entirely a matter of "Gemüt." Pessimism, on the other hand, purports to be a theory of existence, the result of deliberate philosophic argument and investigation, by which its votaries have reached the dispassionate conclusion that there is no real good or pleasure in the world that is not clearly outweighed by evil or pain, and that therefore self-destruction, or at least final annihilation is the consummation devoutly to be wished.

James Sully, in his elaborate treatise on Pessimism, divides it, however, into reasoned and unreasoned Pessimism, including Weltschmerz under the latter head. This is entirely compatible with the definition of Weltschmerz which has been attempted above. But it is interesting to note the attitude of the pessimistic school of philosophy toward this unreasoned pessimism. It emphatically disclaims any interest in or connection with it, and describes all those who are afflicted with the malady as execrable fellows—to quote Hartmann—: "Klageweiber männlichen und weiblichen Geschlechts, welche am meisten zur Discreditierung des Pessimismus beigetragen haben, die sich in ewigem Lamento ergehen, und entweder unaufhörlich in Thränen schwimmen, oder bitter wie Wermut und Essig, sich selbst und andern das Dasein noch mehr vergällen; eine jämmerliche Situation des Stimmungspessimismus, der sie nicht leben und nicht sterben lässt." And yet Hartmann himself does not hesitate to admit that this very condition of individual Weltschmerz, or "Zerrissenheit," is a necessary and inevitable stage in the progress of the mind toward that clarified universal Weltschmerz which is based upon theoretical insight, namely pessimism in its most logical sense. This being granted, we shall not be far astray in assuming that it is also the stage to which the philosophic pessimist will sometimes revert, when a strong sense of his own individuality asserts itself.

If we attempt a classification of Weltschmerz with regard to its essence, or, better perhaps, with regard to its origin, we shall find that the various types may be classed under one of two heads: either as cosmic or as egoistic. The representatives of cosmic Weltschmerz are those poets whose first concern is not their personal fate, their own unhappiness, it may be, but who see first and foremost the sad fate of humanity and regard their own misfortunes merely as a part of the common destiny. The representatives of the second type are those introspective natures who are first and chiefly aware of their own misery and finally come to regard it as representative of universal evil. The former proceed from the general to the particular, the latter from the particular to the general. But that these types must necessarily be entirely distinct in all cases, as Marchand asserts, seems open to serious doubt. It is inconceivable that a poet into whose personal experience no shadows have fallen should take the woes of humanity very deeply to heart; nor again could we imagine that one who has brooded over the unhappy condition of mankind in general should never give expression to a note of personal sorrow....