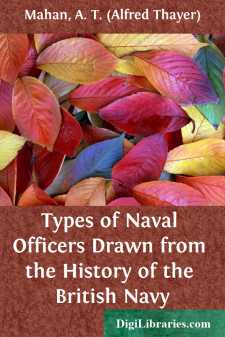 INTRODUCTORY Naval Warfare at the Beginning of the Eighteenth Century

The recent close of the nineteenth century has familiarized us with the thought that such an epoch tends naturally to provoke an estimate of the advance made in the various spheres of human activity during the period which it terminates. Such a reckoning, however, is not a mere matter of more and less, of comparison between the beginning and the end, regardless of intermediate circumstances. The question involved is one of an historical process, of cause and effect; of an evolution, probably marked, as such series of events commonly are, by certain salient incidents, the way-marks of progress which show the road traversed and the succession of stages through which the past has become the present. Frequently, also, such development associates itself not only with conspicuous events, but with the names of great men, to whom, either by originality of genius or by favoring opportunity, it has fallen to illustrate in action the changes which have a more silent antecedent history in the experience and reflection of mankind.

The development of naval warfare in the eighteenth century, its advance in spirit and methods, is thus exemplified in certain striking events, and yet more impressively is identified with the great names of Hawke and Rodney. The period of nearly half a generation intervened between their births, but they were contemporaries and actors, though to no large extent associates, during the extensive wars that occupied the middle of the century—the War of the Austrian Succession, 1739-1748, and the Seven Years War, 1756-1763. These two conflicts are practically one; the same characteristic jealousies and motives being common to both, as they were also to the period of nominal peace, but scarcely veiled contention, by which they were separated. The difference of age between the two admirals contributed not only to obviate rivalry, by throwing their distinctive activities into different generations, but had, as it were, the effect of prolonging their influence beyond that possible to a single lifetime, thus constituting it into a continuous and fruitful development.

They were both successful men, in the ordinary acceptation of the word success. They were great, not only in professional character, but in the results which do not always attend professional desert; they were great in achievement. Each name is indissolubly linked with a brilliant victory, as well as with other less known but equally meritorious actions; in all of which the personal factor of the principal agent, the distinctive qualities of the commander-in-chief, powerfully contributed and were conspicuously illustrated. These were, so to say, the examples, that enforced upon the men of their day the professional ideas by which the two admirals were themselves dominated, and upon which was forming a school, with professional standards of action and achievement destined to produce great effects.

Yet, while this is so, and while such emphatic demonstrations by deeds undoubtedly does more than any other teaching to influence contemporaries, and so to promote professional development, it is probably true that, as a matter of historical illustration, the advance of the eighteenth century in naval warfare is more clearly shown by two great failures, for neither of which were these officers responsible, and in one only of which in fact did either appear, even in a subordinate capacity....