Two Years Before the Mast 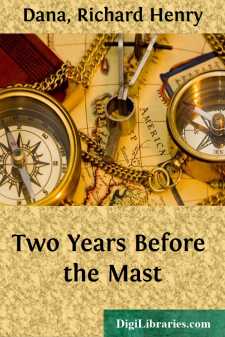 Two years before the mast were but an episode in the life of Richard Henry Dana, Jr.; yet the narrative in which he details the experiences of that period is, perhaps, his chief claim to a wide remembrance. His services in other than literary fields occupied the greater part of his life, but they brought him comparatively small recognition and many disappointments. His happiest associations were literary, his pleasantest acquaintanceships those which arose through his fame as the author of one book. The story of his life is one of honest and competent effort, of sincere purpose, of many thwarted hopes. The traditions of his family forced him into a profession for which he was intellectually but not temperamentally fitted: he should have been a scholar, teacher, and author; instead he became a lawyer.

Born in Cambridge, Mass., August 1, 1815, Richard Henry Dana, Jr., came of a line of Colonial ancestors whose legal understanding and patriotic zeal had won them distinction. His father, if possessed of less vigor than his predecessors, was yet a man of culture and ability. He was widely known as poet, critic, and lecturer; and endowed his son with native qualities of intelligence, good breeding, and honesty.

After somewhat varied and troublous school days, young Dana entered Harvard University, where he took high rank in his classes and bid fair to make a reputation as a scholar. But at the beginning of his third year of college a severe attack of measles interrupted his course, and so affected his eyes as to preclude, for a time at least, all idea of study. The state of the family finances was not such as to permit of foreign travel in search of health. Accordingly, prompted by necessity and by a youthful love of adventure, he shipped as a common sailor in the brig, Pilgrim, bound for the California coast. His term of service lasted a trifle over two years—from August, 1834, to September, 1836. The undertaking was one calculated to kill or cure. Fortunately it had the latter effect; and, upon returning to his native place, physically vigorous but intellectually starved, he reentered Harvard and worked with such enthusiasm as to graduate in six months with honor.

Then came the question of his life work. Though intensely religious, he did not feel called to the ministry; business made no appeal; his ancestors had been lawyers; it seemed best that he should follow where they had led. Had conditions been those of to-day, he would naturally have drifted into some field of scholarly research,—political science or history. As it was, he entered law school, which, in 1840, he left to take up the practice of his profession. But Dana had not the tact, the personal magnetism, or the business sagacity to make a brilliant success before the bar. Despite the fact that he had become a master of legal theory, an authority upon international questions, and a counsellor of unimpeachable integrity, his progress was painfully slow and toilsome. Involved with his lack of tact and magnetism there was, too, an admirable quality of sturdy obstinacy that often worked him injury....