Two Wyoming Girls and Their Homestead Claim A Story for Girls 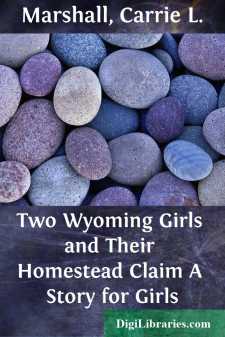 CHAPTER I I GO ON AN ERRAND

A fierce gust of wind and rain struck the windows, and Jessie, on her way to the breakfast table, dish in hand, paused to listen.

“Raining again!” she exclaimed, setting the dish down emphatically. “It seems to me that it has rained every day this spring. When it hasn’t poured here in the valley, it has more than made up for it in the mountains.”

“You are more than half right,” father said, drawing his chair up to the table. “Is breakfast ready, dear? I am going to work in the mines to-day, and I’m in something of a hurry.”

“Going to work in the mines!” Jessie echoed the words, as, I am sure, I did also. I was sitting in the corner dressing little Ralph, or, to be strictly accurate, trying to dress him. No three year-old that ever lived could be more exasperating than he sometimes was during that ordeal or could show a more pronounced distaste for the bondage of civilized garments.

Jessie made haste to dish up the breakfast, but she inquired: “Do you remember, papa, what that old miner who was here the other day told us about mines in the wet season? About what was liable to happen sometimes, and did happen here once, a good many years ago?”

“I don’t know that I do,” father answered, glancing toward Ralph and me, to see if we were ready. As we were anything but that, he continued; “I guess I won’t wait for you children.”

“Me want to do barefoot! Me want to wade in ’e puddle!” cried the child, pulling one soft little foot out of the stocking that I had just succeeded in getting upon it.

“Don’t, Leslie!” father interposed, mildly; “I remember so well how I liked to wade in the mud-puddles when I was a little shaver; but it’s too early in the season, and too cold for that sort of sport now. So, Ralph, my boy, let sister dress you, and don’t hinder.”

Ralph always obeyed father’s slightest word, no matter how gently the word was spoken; so now he sat demurely silent while I completed his toilet.

“What was it that your friend, the miner, said, Jessie?” father asked, as Jessie took her seat and poured out his coffee.

“He said that there had been so much rain on the mountains, and that the Crusoe mines were on such a low level that there was some danger of an inrush of water, like that which ruined the Lost Chance, before we came here.”

“I recollect hearing something about the Lost Chance,” father said, going on with his breakfast indifferently. “There may have been water crevices in it. The accident was probably caused by them—and neglect.”

“I don’t see how it could be all due to neglect,” Jessie persisted. “The miner said that the springs and rivers were all booming full, just as they are now. People never thought of danger from the water, because it was so often warm and dry in the valley—as it is, you know, often, even when it is raining hard on the mountains. The miner said that the men went on with their work in the mine, as usual, until, one afternoon, the timbered walls of the tunnels slumped in like so much wet sand. What had been underground passages became, in a moment, underground rivers, for the water that had been held back and dammed up so long just poured in in a drowning flood. He said that the rainfall seeped through the bogs up on the mountains, and fed underground reservoirs that held the water safely until they were overtaxed. When that happened the water would burst out, finding an outlet for itself in some new place....