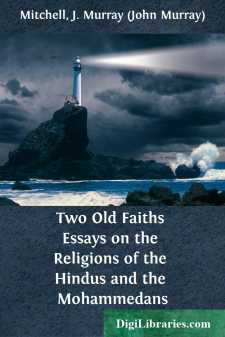 The system of religious belief which is generally called Hinduism is, on many accounts, Hinduism deserving of study.eminently deserving of study. If we desire to trace the history of the ancient religions of the widely extended Aryan or Indo-European race, to which we ourselves belong, we shall find in the earlier writings of the Hindus an exhibition of it decidedly more archaic even than that which is presented in the Homeric poems. Then, the growth—the historical development—of Hinduism is not less worthy of attention than its earlier phases. It has endured for upward of three thousand years, no Its antiquity.doubt undergoing very important changes, yet in many things retaining its original spirit. The progress of the system has not been lawless; and it is exceedingly instructive to note the development, and, if possible, explain it.

We are, then, to endeavor to study Hinduism chronologically. Unless he does so almost every man who tries to comprehend it is, at first, overwhelmed with a feeling of utter confusion and bewilderment. Hinduism spreads out before him as a vast river, or even what seems at first

"a darkIllimitable ocean, without bound,Without dimension, where length, breadth, and height,And time, and place are lost."

But matters begin to clear up when he begins at The discussion chronological.the beginning, and notes how one thing succeeded another. It may not be possible as yet to trace all the windings of the stream or to show at what precise points in its long course it was joined by such and such a tributary; yet much is known regarding the mighty river which every intelligent man will find it profitable to note and understand.

The Christian ought not to rest satisfied with the vague general idea The Christian's duty in relation to the subject. that Hinduism is a form of heathenism with which he has nothing to do, save to help in destroying it. Let him try to realize the ideas of the Hindu regarding God, and the soul, and sin, and salvation, and heaven, and hell, and the many sore trials of this mortal life. He will then certainly have a much more vivid perception of the divine origin and transcendent importance of his own religion. Farther, he will then extend a helping hand to his Eastern brother with far more of sensibility and tenderness; and in proportion to the measure of his loving sympathy will doubtless be the measure of his success. A yearning heart will accomplish more than the most cogent argument.

In this Tract we confine ourselves to the laying down of great leading facts and principles; The purpose of the Tract.but these will be dwelt upon at sufficient length to give the reader, we trust, an accurate conception of the general character and history of Hinduism. We shall also briefly contrast the system with Christianity.

The history of Hinduism may be divided into three great periods, each embracing, in round numbers, about a thousand years.

Regarding the earliest form of Hinduism we must The most ancient writings of India.draw our conceptions from the Veda, or, to speak more accurately, the four Vedas. The most important of these is the Rig Veda; and internal evidence proves it to be the most ancient. It contains above a thousand hymns; the earliest of which may date from about the year 1500 B. C. The Hindus, or, as they call themselves, the Aryas, had by that time entered India, and were dwelling in the north-western portion, the Panjab. The hymns, we may say, are racy of the soil. There is no reference to the life led by the people before they crossed the Himalaya Mountains or entered by some of the passes of Afghanistan.

It would be very interesting if we could discover the pre-Vedic form of the religion. Inferentially this may, to some extent, be done by comparing the teachings of the Vedas with those contained in the books of other branches of the great Aryan family—such as the Greeks, the Romans, and, above all, the Iranians (ancient Persians)....