Two Months in the Camp of Big Bear 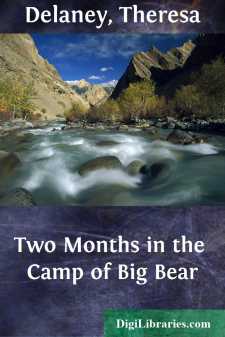 CHAPTER I. WE LEAVE ONTARIO.

We left my father's house at Tintern on the 7th of October, 1884, having been married on the 1st, for Parkdale, where we spent a few days with my husband's friends. We started for our home on the 10th by the Canadian Pacific Railway to Owen Sound, thence by boat to Port Arthur, and then on to Winnipeg by rail, where we stopped one night, going on the next day to Regina. We only stopped in that place one day, taking rail again to Swift Current, arriving there the same day. This ended our travel by the locomotion of steam.

After taking in a supply of provisions we made a start for Battleford, distant 195 miles, by buckboard over the prairie, which stretches out about 130 miles in length, and for the remaining 55 miles there are clumps of trees or bluffs as they are called, scattered here and there. Our journey over this part was very pleasant, the weather was fine and the mode of travelling, which was new to me, delightful. Our company, consisted in addition to ourselves, of only one person, Mr. Levalley, a gentleman from Ottawa. We passed four nights under canvas. The journey was not a lonely one, the ships of the prairie were continually on the go, we passed several companies of freighters with harnessed oxen, half-breeds and Indians. It was also full of incident and adventure; on one occasion, when cooking our tea, we set fire to the prairie, although we worked hard to put it out, it in a very few minutes spread in a most alarming manner, and entirely beyond our control, and we let it go looking on enjoying the scene. Upon nearing Battleford a number of half-famished squaws came to us begging for something to eat, but we were not in a position, unfortunately, to supply their wants, on account of our larder having run dry. We entered Battleford on the 19th of October.

The town is very scattered, covering a large area of ground, it is verily a place of distances and quite in keeping with the north-west generally. There are a few fine houses in the place, notably, the industrial home for Indian children and the residence of Judge Rolleau.

I remained at Battleford six weeks, while my husband went to Frog Creek, (where he had thirteen men working on the house and mills,) and while there I became initiated into the manners and customs of the inhabitants. A few incidents which happened during my stay might be interesting to the reader, therefore, I will jot them down as they come to mind.

After our arrival the Indians and squaws came to see me and would go and tell some of the others to come and see the monias, (squaw) and when they saw my husband they asked him why he did not live with her, and if she was well; and one day I walked with him over to where he was keeping store before he went west and the Indians came in and shook hands, and laughed, and the squaws thought my costume was rather odd and not in keeping with that of the fashionable north-western belle....