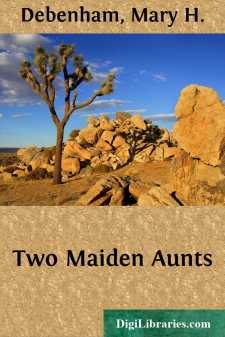 CHAPTER I THE AUNTS

t was seven o'clock on an autumn morning nearly a hundred years ago. A misty October morning, when the meadows looked grey with the heavy dew, and the sky was only just beginning to show pale blue through the haze which veiled it.

There was a certain little hamlet, just a few cottages clustered together beside a country road, where the world seemed hardly yet awake. The road ran across a wide common, where the cows and horses and geese wandered about pretty much as they chose, and the blackberries grew as they grow only on waste ground. The blackberry season was pretty nearly over, and the damp had taken the taste out of those which the village children had left, but the dewy nights were still warm enough to bring up the mushrooms like fairy tables in all directions, and there was at least one gatherer from the village who had been astir an hour ago, for the common was a well-known mushroom ground, and early birds had the best chance. He was coming back now with a goodly basketful, shaking showers of dew off the grass at every step and leaving a track of footmarks behind him. Through the mist he looked a sort of giant, but he was only a tall, sturdy lad of seventeen, in a fustian jacket and the wide hat which countrymen used to wear in the days of our grandfathers. He turned off the common before he reached the village and went down a little lane, at the end of which stood a small gabled house, in a garden where the autumn flowers hung their heads under the heavy dew. There was a paddock behind the house where a cow was feeding, and a gate led through a yard to the back door, and thither the boy was turning when he noticed a little girl in homespun frock and sun-bonnet leaning over the garden gate, looking up rather wistfully at the shuttered windows of the house. She gave a great start as the boy came behind her and laid his hand suddenly on her shoulder.

'Now then, Nance,' he said severely, 'what are you about, disturbing the place at this time in the morning?'

The little girl shook his hand off with an impatient shrug.

'What be you about, Pete, starting me like that? I'm not doing nothing nor disturbing nobody. I can look at the cottage, I suppose, without you to call me up for it?'

'Mother'll be fine and angry when she hears what you've been at,' said the boy, 'peeping and prying on the young ladies, and them in trouble.'

Nancy put up her pretty lip with the injured look of a spoilt child. 'I'm not peeping nor prying nor hurting nobody, and, if I am, what are you doing, I should like to know?' Then, as she noticed his basket, she clapped her hands with a little triumphant laugh.

'I know what 'tis you're after,' she cried; 'you've been off and got them mushrooms, and you've brought them for the young ladies so as you can see Penny or maybe Miss Betty herself, and hear whether it's really true. And haven't I got some eggs, my own hen's eggs, here for them, and only just waiting till they open the shutters to take them in?'

'Well, why don't you go round to the back door, as is the proper place for you,' said the stern elder brother, 'instead of staring at gentlefolks' houses like a great gawky?'

'Well, come to that, I know which is the biggest gawky of us two,' said pert little Nance; 'and, if you must know, I was just waiting for the chance of Miss Betty coming down, seeing Penny might be in one of her tantrums and not tell me a word.' Then, as the front door of the house suddenly opened, she exclaimed, joyously,

'Look, if she isn't there,' and was darting in at the gate, when her brother caught her and held her back....