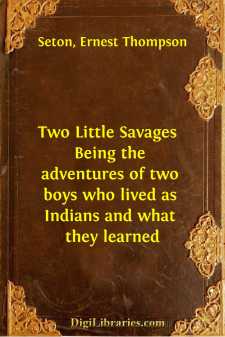 AN was much like other twelve-year-old boys in having a keen interest in Indians and in wild life, but he differed from most in this, that he never got over it. Indeed, as he grew older, he found a yet keener pleasure in storing up the little bits of woodcraft and Indian lore that pleased him as a boy.

His father was in poor circumstances. He was an upright man of refined tastes, but indolent—a failure in business, easy with the world and stern with his family. He had never taken an interest in his son's wildwood pursuits; and when he got the idea that they might interfere with the boy's education, he forbade them altogether.

There was certainly no reason to accuse Yan of neglecting school. He was the head boy of his class, although there were many in it older than 20 himself. He was fond of books in general, but those that dealt with Natural Science and Indian craft were very close to his heart. Not that he had many—there were very few in those days, and the Public Library had but a poor representation of these. "Lloyd's Scandinavian Sports," "Gray's Botany" and one or two Fenimore Cooper novels, these were all, and Yan was devoted to them. He was a timid, obedient boy in most things, but the unwise command to give up what was his nature merely made him a disobedient boy—turned a good boy into a bad one. He was too much in terror of his father to disobey openly, but he used to sneak away at all opportunities to the fields and woods, and at each new bird or plant he found he had an exquisite thrill of mingled pleasure and pain—the pain because he had no name for it or means of learning its nature.

The intense interest in animals was his master passion, and thanks to this, his course to and from school was a very crooked one, involving many crossings of the street, because thereby he could pass first a saloon in whose window was a champagne advertising chromo that portrayed two Terriers chasing a Rat; next, directly opposite this, was a tobacconist's, in the window of which was a beautiful effigy of an Elephant, laden with tobacco. By going a little farther out of his way, there was a game store where he might see some Ducks, and was sure, at least, of a stuffed Deer's head; and beyond that was a furrier shop, with an astonishing stuffed Bear.

At another point he could see a livery stable Dog that was said to have killed a Coon, and at yet another place on Jervie Street was a cottage with a high veranda, under which, he was told, a chained Bear had once been kept. He never saw the Bear. It had been gone for years, but he found pleasure in passing the place. At the corner of Pemberton and Grand streets, according to a schoolboy tradition, a Skunk had been killed years ago and could still be smelled on damp nights. He always stopped, if passing near on a wet night, and sniffed and enjoyed that Skunk smell. The fact that it ultimately turned out to be a leakage of sewer gas could never rob him of the pleasure he originally found in it....