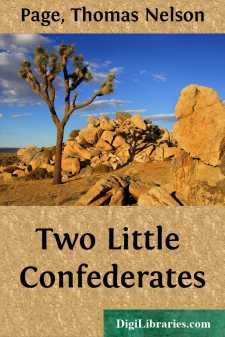 The "Two Little Confederates" lived at Oakland. It was not a handsome place, as modern ideas go, but down in Old Virginia, where the standard was different from the later one, it passed in old times as one of the best plantations in all that region. The boys thought it the greatest place in the world, of course excepting Richmond, where they had been one year to the fair, and had seen a man pull fire out of his mouth, and do other wonderful things. It was quite secluded. It lay, it is true, right between two of the county roads, the Court-house Road being on one side, and on the other the great "Mountain Road," down which the large covered wagons with six horses and jingling bells used to go; but the lodge lay this side of the one, and "the big woods," where the boys shot squirrels, and hunted 'possums and coons, and which reached to the edge of "Holetown," stretched between the house and the other, so that the big gate-post where the semi-weekly mail was left by the mail-rider each Tuesday and Friday afternoon was a long walk, even by the near cut through the woods. The railroad was ten miles away by the road. There was a nearer way, only about half the distance, by which the negroes used to walk and which during the war, after all the horses were gone, the boys, too, learned to travel; but before that, the road by Trinity Church and Honeyman's Bridge was the only route, and the other was simply a dim bridle-path, and the "horseshoe-ford" was known to the initiated alone.

The mansion itself was known on the plantation as "the great-house," to distinguish it from all the other houses on the place, of which there were many. It had as many wings as the angels in the vision of Ezekiel.

These additions had been made, some in one generation, some in another, as the size of the family required; and finally, when there was no side of the original structure to which another wing could be joined, a separate building had been erected on the edge of the yard which was called "The Office," and was used as such, as well as for a lodging-place by the young men of the family. The privilege of sleeping in the Office was highly esteemed, for, like the toga virilis, it marked the entrance upon manhood of the youths who were fortunate enough to enjoy it. There smoking was admissible, there the guns were kept in the corner, and there the dogs were allowed to sleep at the feet of their young masters, or in bed with them, if they preferred it.

In one of the rooms in this building the boys went to school whilst small, and another they looked forward to having as their own when they should be old enough to be elevated to the coveted dignity of sleeping in the Office. Hugh already slept there, and gave himself airs in proportion; but Hugh they regarded as a very aged person; not as old, it was true, as their cousins who came down from college at Christmas, and who, at the first outbreak of war, all rushed into the army; but each of these was in the boys' eyes a Methuselah. Hugh had his own horse and the double-barrelled gun, and when a fellow got those there was little material difference between him and other men, even if he did have to go to the academy,—which was really something like going to school.

The boys were Frank and Willy; Frank being the eldest. They went by several names on the place. Their mother called them her "little men," with much pride; Uncle Balla spoke of them as "them chillern," which generally implied something of reproach; and Lucy Ann, who had been taken into the house to "run after" them when they were little boys, always coupled their names as "Frank 'n' Willy." Peter and Cole did the same when their mistress was not by.

When there first began to be talk at Oakland about the war, the boys thought it would be a dreadful thing; their principal ideas about war being formed from an intimate acquaintance with the Bible and its accounts of the wars of the Children of Israel, in which men, women and children were invariably put to the sword....