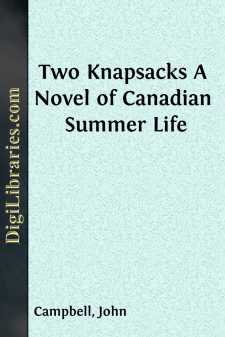 Eugene Coristine and Farquhar Wilkinson were youngish bachelors and fellow members of the Victoria and Albert Literary Society. Thither, on Wednesday evenings, when respectable church-members were wending their way to weekly service, they hastened regularly, to meet with a band of like-minded young men, and spend a literary hour or two. In various degrees of fluency they debated the questions of the day; they read essays with a wide range of style and topic; they gave readings from popular authors, and contributed airy creations in prose and in verse to the Society's manuscript magazine. Wilkinson, the older and more sedate of the two, who wore a tightly-buttoned blue frock coat and an eyeglass, was a schoolmaster, pretty well up in the Toronto Public Schools. Coristine was a lawyer in full practice, but his name did not appear on the card of the firm which profited by his services. He was taller than his friend, more jauntily dressed, and was of a more mercurial temperament than the schoolmaster, for whom, however, he entertained a profound respect. Different as they were, they were linked together by an ardent love of literature, especially poetry, by scientific pursuits, Coristine as a botanist, and Wilkinson as a dabbler in geology, and by a firm determination to resist, or rather to shun, the allurements of female society. Many lady teachers wielded the pointer in rooms not far removed from those in which Mr. Wilkinson held sway, but he did not condescend to be on terms even of bowing acquaintance with any one of them. There were several young lady typewriters of respectable city connections in the offices of Messrs. Tyler, Woodruff and White, but the young Irish lawyer passed them by without a glance. These bachelors were of the opinion that women were bringing the dignity of law and education to the dogs.

It was a Wednesday evening in the beginning of July, and the heat was still great in the city. Few people ventured out to the evening services, and fewer still found their way to the Victoria and Albert hall; in fact, there was not a quorum, and, as the constitution stated that, in such a case, the meeting should be adjourned, it was adjourned accordingly. Coristine lit a cigar in the porch, and Wilkinson, who did not smoke, but said he liked the odour of good tobacco, took his arm for a walk along the well-lit streets. They agreed that it was time to be out of town. Coristine said: "Let us go together; I'll see one of the old duffers and get a fortnight's leave." Wilkinson had his holidays, so he eagerly answered: "Done! but where shall we go? Oh, not to any female fashion resort." At this Coristine put on the best misanthropic air he could call up, with a cigar between his lips, and then, as if struck by a happy thought, dug his elbow into his companion's side and ejaculated: "Some quiet country place where there's good fishing." Wilkinson demurred, for he was no fisherman. The sound of a military band stopped the conversation. It came into sight, the bandsmen with torches in their headgear, and, after it, surrounded and accompanied by all the small boys and shop-girls in the town, came the Royals, in heavy marching order. The friends stood in a shop doorway until the crowd passed by, and then, just as soon as a voice could be distinctly heard, the schoolmaster clapped his companion on the shoulder and cried, "Eureka!" Coristine thought the music had been too much for his usually staid and deliberate friend. "Well, old Archimedes, and what is it you've found? Not any new geometrical problems, I hope." "Listen to me," said the dominie, in a tone of accustomed authority, and the lawyer listened.

"You've heard Napoleon or somebody else say that every soldier of France carries a marshal's baton in his knapsack?"

"Never heard the gentleman in my life, and don't believe it, either."

"Well, well, never mind about that; but I got my idea out of a knapsack."

"Now, what's the use of your saying that, when its myself knows that you haven't got such a thing to bless yourself with?"

"I got it out of a soldier's—a volunteer's knapsack, man."

"O, you thief of the world! And where have you got it hid away?"

"O rubbish and nonsense—a knapsack in your head!"

"And where's the knapsack?"

"Then the grenadier has the knapsack, and you the idea: I thought you said the idea was in the knapsack."