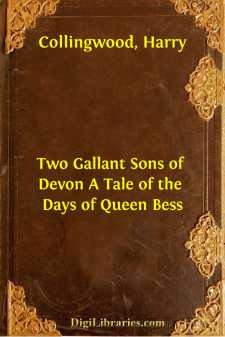 It was a little after seven o’clock on June 19 in the year of Our Lord 1577, and business was practically over for the day. The taverns and alehouses were, of course, still open, and would so remain for three or four hours to come, for the evening was then, as it is now, their most busy time; but nearly all the shops in Fore Street of the good town of Devonport were closed, one of the few exceptions being that of Master John Summers, “Apothecary, and Dealer in all sorts of Herbs and Simples”, as was announced by the sign which swung over the still open door of the little, low-browed establishment.

The shop was empty of customers for the moment, its only occupants being two persons, both of whom were employees of Master John Summers. One—the tall, thin, dark, dreamy-eyed individual behind the counter who was with much deliberation and care completing the preparation of a prescription—was Philip Stukely, the apothecary’s only assistant; while the other was one Colin Dunster, a pallid, raw-boned youth whose business it was to distribute the medicines to his master’s customers. He was slouching now, outside the counter, beside a basket three-parts full of bottles, each neatly enwrapped in white paper and inscribed with the name and address of the customer to whom it was to be delivered in due course. Apparently the package then in course of preparation would complete the tale of those to be delivered that night; for as Stukely tied the string and wrote the address in a clear, clerkly hand, the lad Dunster straightened himself up and laid a hand upon the basket, as though suddenly impatient to be gone.

At this moment another youth, with blue-grey eyes, curly, flaxen hair, tall, broad-chested, and with the limbs of a young Hercules, burst into the shop, taking at a stride the two steps which led down into it from the street, as he exclaimed:

“Heyday, Master Phil, how is this? Hast not yet finished compounding thy potions? My day’s work ended an hour and more ago; and the evening is a perfect one for a sail upon the Sound.”

“Ay, so ’tis, I’ll warrant,” answered Stukely, as he deposited the package in the basket. “There, Colin, lad,” he continued, “that is the last for to-night; and—listen, sirrah! See that thou mix not the parcels, as thou didst but a week agone, lest thou bring sundry of her most glorious Majesty’s lieges to an untimely end! There”—as the boy seized the basket and hurried out of the shop—“that completes my day’s work. Now I have but to put up the shutters and lock the door; and then, have with thee whither thou wilt. Help me with the shutters, Dick, there’s a good lad, so shall I be ready the sooner.”

Five minutes sufficed the two to put up the shutters, and for Stukely to wash his hands, discard his apron, change his coat, and lock up the shop; then the two somewhat oddly contrasted friends wended their way quickly down the narrow street on their way to the waterside.

As they go, let us take the opportunity to become better acquainted with them both, for, although they knew it not, they were taking their first steps on the road to many a strange and wild adventure, whither we who also love adventure propose to accompany them....