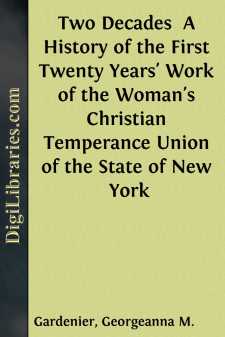 istories are strange things: they uncover so many hidden events, and bring back so many lost memories. A history that traces the beginnings of a reform movement, that weaves the shuttle of memory in and out of the web of the past and presents a perfect woof of fact and incident, is a treasury of knowledge that will not fail to delight and instruct. But the compilation of such a history is no easy task, and especially is this true of an organization with the many ramifications of the Woman's Christian Temperance Union of the State of New York.

The 14th of October, 1894, marked the twenty-first milestone in our history, and the story that follows is the story of the hopes and fears, the smiles and tears of the past twenty years, mingled with songs of rejoicing for grand achievement. For twenty years this organization has stood with undaunted front against the sin of the state as represented by the legalized traffic in intoxicating liquors and by the awful vice that would put a premium on woman's shame.

During this time it has uttered its shibboleth that that political party, and that only, which declares in its platform for the complete prohibition of the liquor traffic, can have its influence and its prayers. There have been days of darkness and disaster, but by the grace of God no weapon turned against the union has prospered, and every tongue that has risen in judgment has been condemned. The growth of the organization has been marvelous, for in twenty years it has grown from a few hundred members to twenty-two thousand, and from a few auxiliaries to over nine hundred, which cover as a network the entire state. Its workers are indefatigable, and wage their peaceful war for "sweeter manners, purer laws," with an earnestness that carries conviction to the hearts of the people and the law-makers of the state. And wherever there is a wrong to right, an evil to attack, or a hand to help, there will you find a woman with a white ribbon on her breast.

The committee having this history in charge have searched faithfully the records of twenty years. Some of the names recorded here have never been heard by the workers of later years. Their owners have crossed the boundary-line that separates this world from the next. But living and dead speak with one voice of their love, service, and consecration to the work; and out of these God has welded a union that stands for all that is pure and good in government and the home, and whose work for Him and for humanity will never cease until

"All the bells of God shall ring the ship of Temperance in."

We feel that the state is under many obligations to Mrs. Graham and Mrs. Gardenier for so faithfully recording the work of these past years, for while in one sense it has been a labor of love, yet the many hours spent in earnest research for the necessary data must have been hours of toil. And while we thank our beloved sisters for their work and interest, our thoughts turn to the thousands of women whose lives have made this history possible—those who have gone steadfastly forward in the line of duty, thinking not of the world's applause, but doing all things and bearing all things in the Master's name and for the Master's sake....