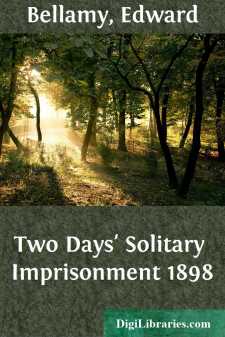 Mr. Joseph Kilgore was suffering from one of those spring influenzas which make a man feel as if he were his own grandfather. His nose had acquired the shape of a turnip and the complexion of a beet. All his bones ached as if he had been soundly thrashed, and his eyes were weak and watery. Your deadly disease is oftener than not a gentleman who takes your life without mauling you, but the minor diseases are mere bruisers who just go in for making one as uncomfortable and unpresentable as possible. Mr. Kilgore's influenza had been coming on for several days, and when he woke up this particular morning and heard the rain dripping on the piazza-roof just under his bedroom-window, he concluded, like a sensible man, that he would stay at home and nurse himself over the fire that day, instead of going to the office. So he turned over and snoozed for an hour or two, luxuriating in a sense of aches and pains just pronounced enough to make the warmth and softness of the bed delightful.

Toward noon, the edge of this enjoyment becoming dulled, he got up, dressed, and came downstairs to the parlor, where his brother's wife (he was a bachelor, living with a married brother) had considerately kindled up a coal-fire in the grate for his benefit.

After lying off in the rocking-chair till past dinner-time, he began to feel better and consequently restless. Concluding that he would like to read, he went rummaging about the bookcases for a likely-looking novel. At length he found in the upper shelf of a closet a book called "Rôles of a Detective," containing various thrilling accounts of crimes and the entanglement of criminals in the meshes of law and evidence.

One story in particular made a strong impression on his mind. It was a tale of circumstantial evidence, and about how it very nearly hung an innocent man for a murder which he had no thought of committing. It struck Joseph rather forcibly that this victim of circumstantial evidence was as respectable and inoffensive a person as himself, and probably had never any more thought of being in danger from the law. Circumstances had set their trap for him while he was quite unconscious of peril, and he only awoke to find himself in the toils. And from this he went on to reflect upon the horrible but unquestionable fact that every year a certain proportion, and perhaps a very considerable proportion, of those who suffered the penalties of the law, and even the death-penalty, are innocent men,—victims of false or mistaken evidence. No man, however wise or virtuous, can be sure that he will not be taken in this fearful conscription of victims to the blind deity of justice. "None can tell," thought Joseph, with a shudder, "that the word he is saying, the road he is turning, the appointment he is making, or whatever other innocent act he is now engaged in, may not prove the last mesh in some self-woven death-net, the closing link in some damning chain of evidence whose devilish subtlety shall half convince him that he must be guilty as it wholly convinces others."

Timidity is generally associated with imaginativeness, if not its result, and Joseph, although he concealed the fact pretty well under the mask of reticence, was constitutionally very timid. He had an unprofitable habit of taking every incident of possible embarrassment or danger that occurred to his mind as the suggestion for imaginary situations of inconvenience or peril, which he would then work out, fancying how he would feel and what he would do, with the utmost elaboration, and often with really more nervous excitement than he would be likely to experience if the events supposed should really occur. So now, and all the more because he was a little out of sorts, the suggestions of this story began to take the form in his mind of an imaginary case of circumstantial evidence of which he was the victim. His fancy worked up the details of a fictitious case against himself, which he, although perfectly innocent, could meet with nothing more than his bare denial....