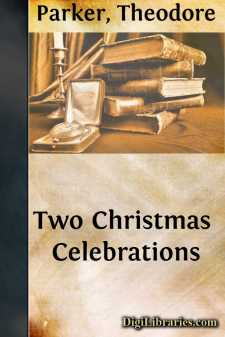 A great many years ago, Augustus Caesar, then Emperor of Rome, ordered his mighty realm to be taxed; and so, in Judea, it is said, men went to the towns where their families belonged, to be registered for assessment. From Nazareth, a little town in the north of Judea, to Bethlehem, another little but more famous town in the south, there went one Joseph, the carpenter, and his wife Mary,—obscure and poor people, both of them, as the story goes. At Bethlehem they lodged in a stable; for there were many persons in the town, and the tavern was full. Then and there a little boy was born, the son of this Joseph and Mary; they named him JEHOSHUA, a common Hebrew name, which we commonly call Joshua; but, in his case, we pronounce it JESUS. They laid him in the crib of the cattle, which was his first cradle. That was the first Christmas, kept thus in a barn, 1856 years ago. Nobody knows the day or the month; nay, the year itself is not certain.

After a while the parents went home to Nazareth, where they had other sons,—James, Joses, Simon, and Judas,—and daughters also; nobody knows how many. There the boy JESUS grew up, and it seems followed the calling of his father; it is said, in special, that he made yokes, ploughs, and other farm-tools. Little is known about his early life and means of education. His outside advantages were, no doubt, small and poor; but he learned to read and write, and it seems became familiar with the chief religious books of his nation, which are still preserved in the Old Testament.

At that time the thinking people had outgrown the old forms of religion, inherited from their fathers, just as a little girl becomes too stout and tall for the clothes which once fitted her babyhood; or as the people of New England have now become too rich and refined to live in the rough log-cabins, and to wear the coarse, uncomfortable clothes, which were the best that could be got two hundred years ago. For mankind continually grows wiser and better,—and so the old forms of religion are always getting passed by; and the religious doctrines and ceremonies of a rude age cannot satisfy the people of an enlightened age, any more than the wigwams of the Pequod Indians in 1656 would satisfy the white gentlemen and ladies of Boston and Worcester in 1856. The same thing happens with the clothes, the tools, and the laws of all advancing nations. The human race is at school, and learns through one book after another,—going up to higher and higher studies continually....