Twinkle and Chubbins Their Astonishing Adventures in Nature-Fairyland 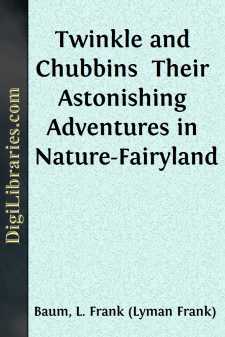 "THERE'S a woodchuck over on the side hill that is eating my clover," said Twinkle's father, who was a farmer.

"Why don't you set a trap for it?" asked Twinkle's mother.

"I believe I will," answered the man.

So, when the midday dinner was over, the farmer went to the barn and got a steel trap, and carried it over to the clover-field on the hillside.

Twinkle wanted very much to go with him, but she had to help mamma wash the dishes and put them away, and then brush up the dining-room and put it in order. But when the work was done, and she had all the rest of the afternoon to herself, she decided to go over to the woodchuck's hole and see how papa had set the trap, and also discover if the woodchuck had yet been caught.

So the little girl took her blue-and-white sun-bonnet, and climbed over the garden fence and ran across the corn-field and through the rye until she came to the red-clover patch on the hill.

She knew perfectly well where the woodchuck's hole was, for she had looked at it curiously many times; so she approached it carefully and found the trap set just in front of the hole. If the woodchuck stepped on it, when he came out, it would grab his leg and hold him fast; and there was a chain fastened to the trap, and also to a stout post driven into the ground, so that when the woodchuck was caught he couldn't run away with the trap.

TWINKLE WAITS FOR THE WOODCHUCK

But although the day was bright and sunshiny, and just the kind of day woodchucks like, the clover-eater had not yet walked out of his hole to get caught in the trap.

So Twinkle lay down in the clover-field, half hidden by a small bank in front of the woodchuck's hole, and began to watch for the little animal to come out. Her eyes could see right into the hole, which seemed to slant upward into the hill instead of downward; but of course she couldn't see very far in, because the hole wasn't straight, and grew black a little way from the opening.

It was somewhat wearisome, waiting and watching so long, and the warm sun and the soft chirp of the crickets that hopped through the clover made Twinkle drowsy. She didn't intend to go to sleep, because then she might miss the woodchuck; but there was no harm in closing her eyes just one little minute; so she allowed the long lashes to droop over her pretty pink cheeks—just because they felt so heavy, and there was no way to prop them up.

Then, with a start, she opened her eyes again, and saw the trap and the woodchuck hole just as they were before. Not quite, though, come to look carefully. The hole seemed to be bigger than at first; yes, strange as it might seem, the hole was growing bigger every minute! She watched it with much surprise, and then looked at the trap, which remained the same size it had always been. And when she turned her eyes upon the hole once more it had not only become very big and high, but a stone arch appeared over it, and a fine, polished front door now shut it off from the outside world. She could even read a name upon the silver door-plate, and the name was this: