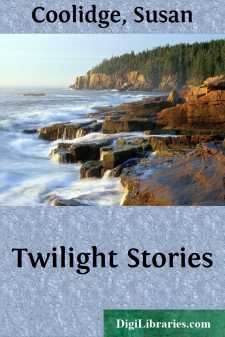 CHRISTMAS DAY. The Christmas chimes are pealing highBeneath the solemn Christmas sky,And blowing winds their notes prolongLike echoes from an angel's song;Good will and peace, peace and good willRing out the carols glad and gay,Telling the heavenly message stillThat Christ the Child was born to-day.In lowly hut and palace hallPeasant and king keep festival,And childhood wears a fairer guise,And tenderer shine all mother-eyes;The aged man forgets his years,The mirthful heart is doubly gay,The sad are cheated of their tears,For Christ the Lord was born to-day.SUSAN COOLIDGE. They sat on the curbingIn a crowded row—Two little maidsAnd one little beau,—Watching to seeThe big Elephant goBy in the street parade;But when it came past,Of maids there were none,For down a by-streetThey cowardly run,While one little beauMade all manner of fun—Of the Elephant he wasn't afraid. THE ONLY WOMAN IN THE TOWN.

One hundred years' and one ago, in Boston, at ten of the clock one April night, a church steeple had been climbed and a lantern hung out.

At ten, the same night, in mid-river of the Charles, oarsmen two, with passenger silent and grim, had seen the signal light out-swung, and rowed with speed for the Charlestown shore.

At eleven, the moon was risen, and the grim passenger, Paul Revere, had ridden up the Neck, encountered a foe, who opposed his ride into the country, and, after a brief delay, rode on, leaving a British officer lying in a clay pit.

At mid-night, a hundred ears had heard the flying horseman cry, "Up and arm. The Regulars are coming out!"

You know the story well. You have heard how the wild alarm ran from voice to voice and echoed beneath every roof, until the men of Lexington and Concord were stirred and aroused with patriotic fear for the safety of the public stores that had been committed to their keeping.

You know how, long ere the chill April day began to dawn, they had drawn, by horse power and by hand power, the cherished stores into safe hiding-places in the depth of friendly forest-coverts.

There is one thing about that day that you have NOT heard and I will tell you now. It is, how one little woman staid in the town of Concord, whence all the women save her had fled.

All the houses that were standing then, are very old-fashioned now, but there was one dwelling-place on Concord Common that was old-fashioned even then! It was the abode of Martha Moulton and "Uncle John." Just who "Uncle John" was, is not now known, but he was probably Martha Moulton's uncle. The uncle, it appears by record, was eighty-five years old; while the niece was ONLY three-score and eleven.

Once and again that morning, a friendly hand had pulled the latch-string at Martha Moulton's kitchen entrance and offered to convey herself and treasures away, but, to either proffer, she had said: "No, I must stay until Uncle John gets the cricks out of his back, if all the British soldiers in the land march into town."

At last, came Joe Devins, a lad of fifteen years—Joe's two astonished eyes peered for a moment into Martha Moulton's kitchen, and then eyes and owner dashed into the room, to learn, what the sight he there saw, could mean....